Mamata Banerjee also launched a blistering attack on the BJP claiming that they were adding communal colours to this incident. 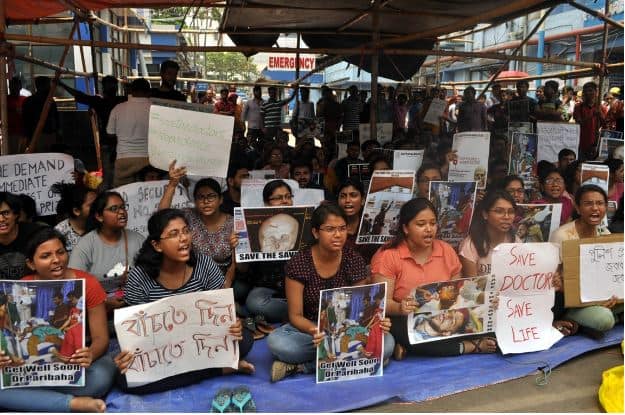 West Bengal Chief Minister Mamata Banerjee on Thursday intervened four days after the junior doctors at Nil Ratan Sarkar Medical College and Hospital began their agitation after a doctor was beaten up by the family of a deceased patient. The West Bengal chief minister, however, failed to end the impasse as the junior doctors refused to call off their strike.

Mamata reached  SSKM hospital in South Kolkata on Thursday morning and issued an ultimatum to the junior doctors to join work by 2pm. “The doctors must get back to work by 2pm as the protests have affected services at government hospitals across the state. Those doctors who don’t return to work must leave the hostel. Agitating doctors are outsiders. The government will not support them in any way. I condemn doctors who have gone on strike. Policemen die in line of duty but the police don’t go on a strike,” she said, adding, “The state spends Rs 25 lakh on each doctor and then they shirk work. This won’t be tolerated. Are they doctors?”

Mamata also launched a blistering attack on the BJP claiming that they were adding communal colours to this incident. Slammed for not even visiting protesting doctors since the start of outrage following Monday’s assault on the junior doctor, the protesting junior doctors raised slogans against Mamata on her arrival at the SSKM hospital.

On the other hand, the agitating doctors demanded deployment of armed police officers on hospital premises and ensure their safety and security. A delegation from the NRS hospital met the Governor of West Bengal, Keshari Nath Tripathi and briefed them about the situation. “We told the Governor about the problems we are facing. We had expected that the Chief Minister would stand by us. She visited the SSKM hospital but instead of standing by us, she termed us as ‘outsiders’. All that we demanded was the arrest of the accused persons and deployment of armed police officers. The way our colleague was attacked was inhuman. His skull has been injured seriously,” said the delegation from the NRS hospital.

Mass resignations began on Thursday evening as 18 doctors from Sagar Dutta Medical College and Hospital sent their resignation to the state health department. The hospital where the doctor was assaulted saw the resignation of Principal, Superintendent and five other doctors from the Forensic Medicine Department.

On Monday, a clash broke out at NRS Medical College and Hospital after an elderly patient died on Monday night. Relatives of deceased patient claimed medical negligence and thrashed two junior doctors. One of the junior doctors, Paribaha Mukhpadhyay suffered serious injuries on his skull and is presently undergoing treatment at a city hospital. Since Monday night, junior doctors are on strike and demanding safety from the government and police.