The funeral at Miramar beach was attended by BJP President Amit Shah, some Union ministers and chief ministers of BJP-ruled states. 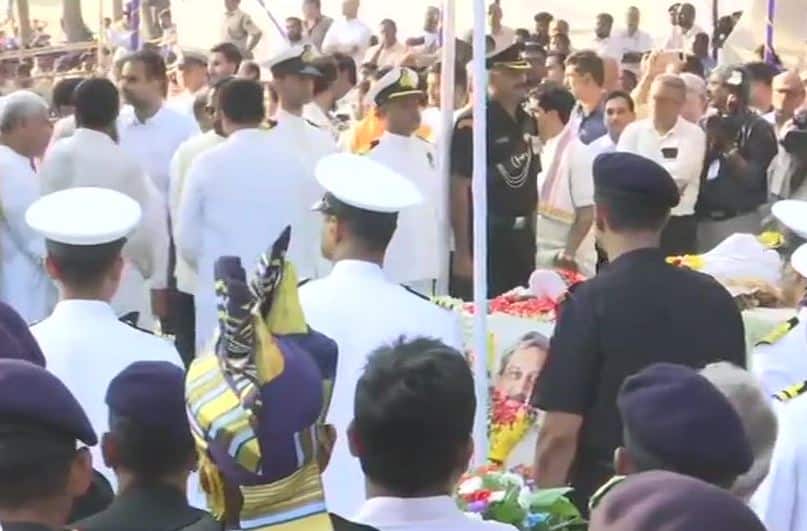 The funeral at Miramar beach was attended by BJP President Amit Shah, some Union ministers and chief ministers of BJP-ruled states. The funeral pyre was lit by Parrikar's eldest son Utpal.

Parrikar's funeral procession started from the Kala Academy where thousands, including Prime Minister Narendra Modi, Defence Minister Nirmala Sitharaman and Union Minister Smriti Irani paid their last respects to the former defence minister. The mortal remains of Parrikar, 63, were kept in a flower-decked hearse which left for the Miramar beach with thousands of mourners.

Parrikar died on Sunday after a prolonged illness. The BJP leader had been undergoing treatment for pancreatic ailment in hospitals in New York, Goa, Mumbai and Delhi since February 2018.

Prime Minister Narendra Modi expressed sadness over Parrikar's demise and called him an unparalleled leader. "Shri Manohar Parrikar was an unparalleled leader. A true patriot and exceptional administrator, he was admired by all. His impeccable service to the nation will be remembered by generations. Deeply saddened by his demise. Condolences to his family and supporters. Om Shanti,"" tweeted the Prime Minister on Sunday.

Parrikar was a graduate from IIT-Bombay and also a RSS pracharak before he took active plunge in politics in 1994. He started his political innings on a high by winning from the Panaji constituency on BJP ticket. He served as the Goa CM on four occasions and was also Defence Minister November 2014 and March 2017.

The Indian Institute of Technology (IIT) Bombay on Sunday, expressed grief and condoled his death. In a statement, IIT-B said that the chief minister came as "a shock to all of us at IIT Bombay".

The institute added that CM Parrikar was also "deeply involved with the launch of IIT Goa". It is to be noted that Parrikar was also the Chief Guest for the 55th Convocation of IIT Bombay held on August 12, 2017.

Born on December 13, 1955, Parrikar will always be remembered for his simplicity and honesty. Parrikar was one of the few leaders who never sided with the pomp and show which are the hallmarks of Indian politicians.

Parrikar is survived by two sons. His wife Medha Parrikar died in 2001 following an illness.