PM Modi said the government is ready to discuss all issues of national importance on the floor of both Houses of Parliament. 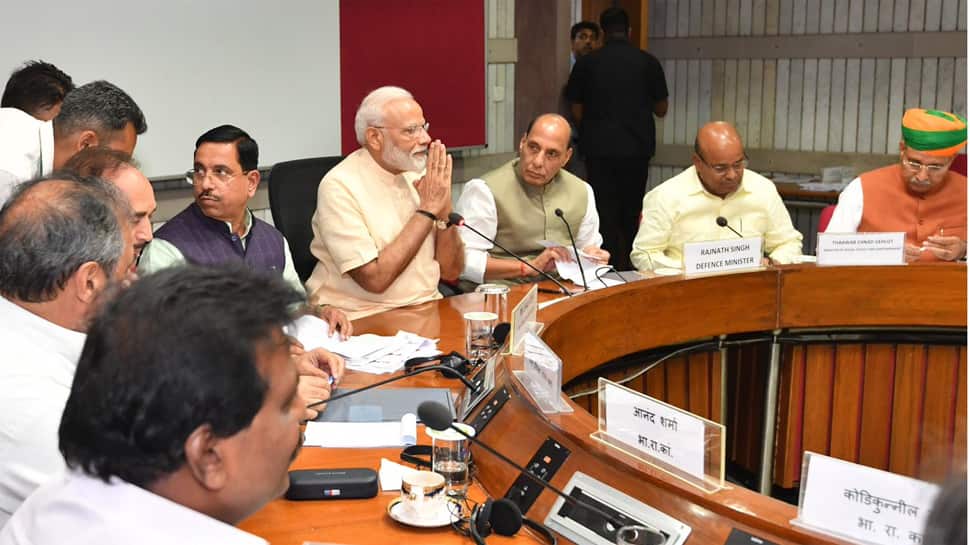 NEW DELHI: Ahead of the Budget session which begins on Monday, the government on Sunday convened an all-party meeting where Prime Minister Narendra Modi urged all members for cooperation for the session. Opposition members in the meeting demanded that issues such as farm distress, unemployment and drought should be debated upon in Parliament.

The Prime Minister welcomed newly elected MPs and expressed hope that fresh zeal and energy would be infused in the functioning of the Parliament. "We are for the people, we cannot win hearts by disrupting the functioning of the Parliament. All parties must keep political differences aside and commit themselves to tirelessly work in the direction of Nation's progress," he said.

Urging members to work with the government and strive to achieve its vision of making a New India by 2022 and 'Sabka Saath, Sabka Vikas, Sabka Vishwas', he said that the government is ready to discuss all issues of national importance on the floor of both Houses of Parliament.

The meeting that was chaired by the Prime Minister had representatives of all parties, including Leader of Opposition in Rajya Sabha Ghulam Nabi Azad, National Conference leader Farooq Abdullah and TMC leader Derek O'Brien in attendance.

"There should be a discussion on farmers distress, unemployment, and drought. We are not opposed to all those bills which are in the interest of the people," Azad said after the meeting.

Alleging that the Centre wants to run Jammu and Kashmir state through the Governor's administration, he demanded that Assembly elections in the state be held soon.

TMC's O'Brien demanded that the Women's Reservation Bill, which seeks to reserve one-third of all seats for women in Lok Sabha and state Assemblies, be brought immediately in the session.

The first session of the newly-constituted 17th Lok Sabha will be held from June 17 to July 26. There will be 30 sittings spread over 40 days in Lok Sabha and 27 sittings spread over 37 days sittings in the Rajya Sabha. The Session will mainly be devoted to Oath taking, Election of Speaker, the Motion of Thanks on the President’s Address, Financial Business relating to Union Budget for 2019-20.