Vadra will face ED for a second round of questioning in PMLA case on Thursday. 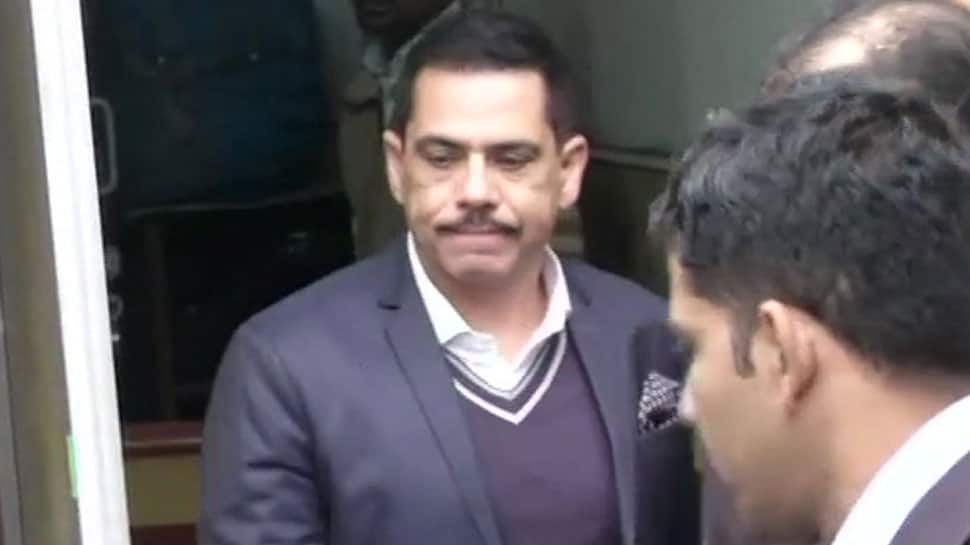 NEW DELHI: Robert Vadra, the brother-in-law of Congress president Rahul Gandhi, who was grilled by the Enforcement Directorate for several hours on Wednesday, arrived at the agency office for the second round of questioning in connection with a money laundering case on Thursday.

According to ANI, Vadra arrived at the ED office in Jamnagar House in central Delhi at about 11:25 AM for questioning in the case.

Delhi: Robert Vadra arrives at the Enforcement Directorate office to appear in connection with a money laundering case. ED had questioned him for nearly 6 hours yesterday. pic.twitter.com/uKK5wQTBEe

Vadra was grilled for nearly two hours in connection with the money laundering allegations against him.

Sonia Gandhi's son-in-law was askedby the ED officials to appear before the agency's office in Jaipur on February 12, said ANI.

Vadra had appeared before the agency on Wednesday afternoon after which he was questioned for around six hours.

He was accompanied by his wife and Congress general secretary for Uttar Pradesh East, Priyanka Gandhi Vadra.

She, however, left the ED office after dropping Vadra, who was questioned by the investigating agency for the first time.

A team of seven ED officials of the rank of Deputy Director and Assistant Directors took part in his questioning.

According to an ED official, Vadra was asked questions relating to transactions, purchase and possession of certain immovable assets in London.

The ED's case relates to the ownership of 1.9 million pounds of undisclosed assets abroad, allegedly belonging to Vadra.

The questioning came in the wake of an order by a Delhi Court on February 2 directing Vadra to appear before the ED for questioning while hearing the anticipatory bail plea filed by him.

The court had on Saturday also granted interim bail to Vadra till February 16.

Earlier in the day, Priyanka Gandhi Vadra, who accompanied her husband to the ED office made a strong political statement.

"I stand by my family," she later told reporters at the AICC headquarters where Congress workers shouted slogans hailing her. "Priyanka you fight on, we are with you!"

Meanwhile, the ruling BJP on Wednesday attacked Robert Vadra over kickbacks which his company allegedly received in the VVIP chopper scam case and a petroleum deal done under the UPA government in 2009, calling the Gandhi family "bail parivar" whose foundation was "built on corruption."

Union Law Minister Ravi Shankar Prasad has said that Robert Vadra's appearance before the Enforcement Directorate (ED) is a success of democracy and a reflection of Modi government's will that even a person hailing from a very well-known family had to submit to the might of the law.

"I would not like to make a comment on the specific matter of Robert Vadra except to highlight that it is a measure of success of Indian democracy, rule of law and the current ruling dispensation's will that a gentleman hailing from a very well known family had to submit to the might of law," Prasad said answering a query after a briefing of the Union Cabinet here.

BJP spokesperson Sambit Patra asked Rahul Gandhi to reveal Vadra`s connection with Santech -- a UAE-based company used as a front to funnel money in the petro-deal.

He challenged Gandhi to explain how a "road-pati" became a "crorepati" referring to Vadra.

Landfill in Delhi transformed into park with replicas of world's wonders