The strike has been called by ten major trade unions. 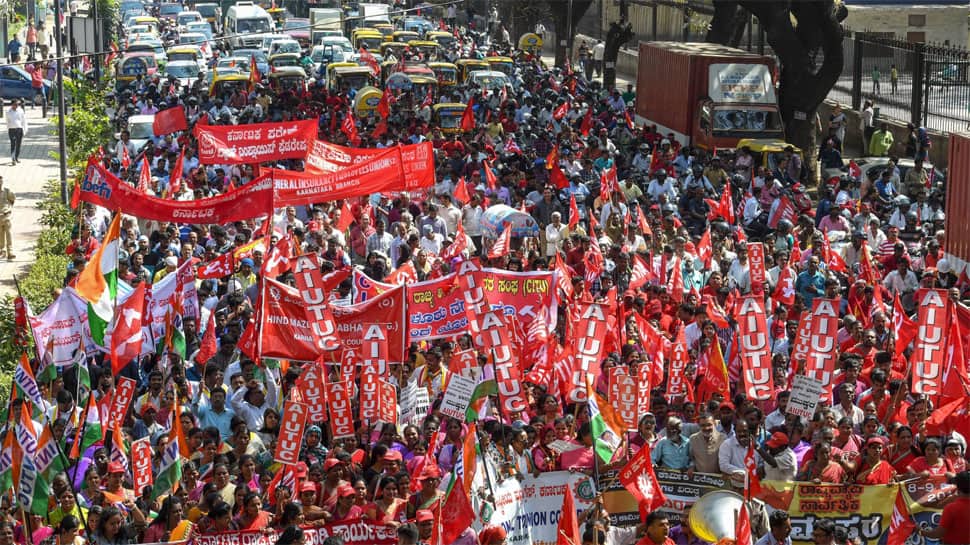 In Mumbai, over 32,000 employees of Mumbai's civic transport undertaking went on an indefinite strike to demand higher wages. The protest, which coincided with the two-day strike called by 10 trade unions, affected nearly 25 lakh daily commuters.

Daily life was affected Left-ruled Kerala with schools and colleges being shut and banking services being affected. Trains were stopped in Kerala while buses and autorickshaws were off the road, hitting normal life, according to reports from the state. Workers from various sectors have extended support to the two-day strike.

In West Bengal, clashes between Trinamool and CPM workers was reported in Asansol. There were also incidents of stone pelting at a school bus. Protesting members burnt effigies and tyres on streets in some parts of the state including Kolkata. They also blocked railway tracks in some part of West Bengal, delaying some long-distance trains.

Meanwhile in Rajasthan, 22 policemen were injured following clashes at the manufacturing plant of a Japanese company as workers, who were supporting the stir, tried to enter its premises, police said. Union leaders claimed that 50 workers injured in the police action against protesters.

The 48-hour bandh was called by a consortium of ten central trade unions and has received support from organisations like the AITUC, Centre of Indian Trade Union (CITU), Hind Mazdoor Sabha (HMS), All India United Trade Union Centre (AIUTUC), Trade Union Coordination Centre (TUCC), All India Central Council of Trade Unions (AICCTU), along with employees in the banking and insurance sector. Farm unions like All India Kisan Sabha (AIKS) cand Bhumi Adhikar Andolan are also part of the strike.

According to bank unions, thousands of bank employees participated in the strike, impacting counter activities such as cash deposit and withdrawal as well as cheque clearances were impacted at many branches.

Lok Sabha clears the way for reservation for upper caste poor: Who said what