NCP and Congress will also chalk out their strategy vis-a-vis government formation in Maharashtra along with Shiv Sena. 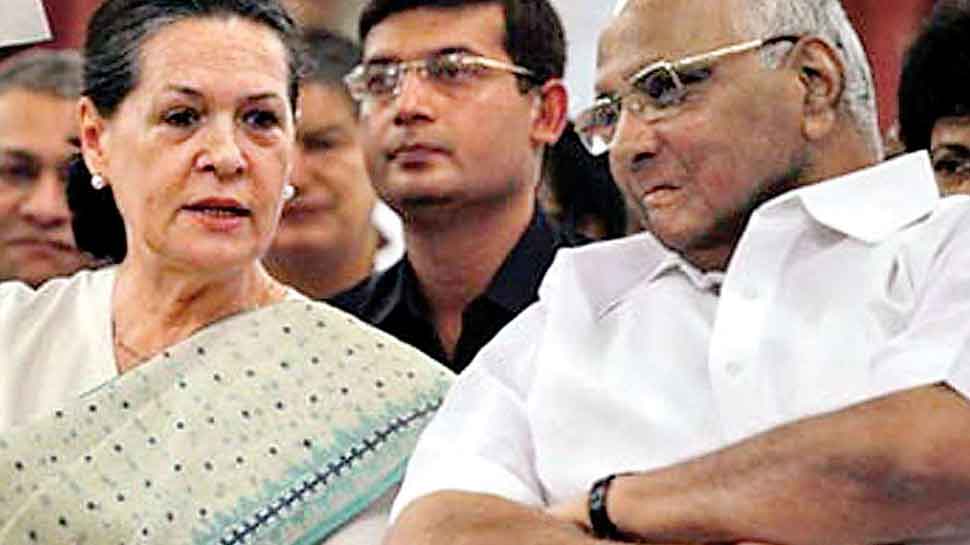 NEW DELHI: The top leaders of the Sharad Pawar-led NCP and Congress are scheduled to meet on Wednesday to finalise the common minimum programme for the formation of a coalition government in Maharashtra.

The two sides will also chalk out their strategy vis-a-vis government formation in Maharashtra along with Shiv Sena.

and discuss further course of action regarding government formation in Maharashtra. The joint meeting of both parties will be held on Wednesday evening in the national capital. Notably, both parties will hold the meeting to give the final shape to the Common Minimum Programme (CMP).

Wednesday's meeting comes a day after Pawar met Sonia Gandhi at the latter’s residence to discuss the current political situation of Maharashtra. However, the NCP chief said that they did not talk anything about government formation in Maharashtra.

Pawar said that during the meeting with the Congress president, Congress leader AK Antony was also present. “We discussed the political situation in Maharashtra. She wanted to know about the situation about which I briefed her,” he added.

Prior to his meeting with Sonia, Sharad Pawar met Shiv Sena leader Sanjay Raut in Delhi. The 15-minute meeting between Raut and Pawar took place at Pawar's 6, Janpath residence.

The NCP, Congress and Shiv Sena leaders are said to be in touch with each other over forming a coalition government in Maharashtra after the snapping of ties of between BJP and Shiv Sena over the chief minister's post.

Sources claim that the Congress and the NCP are willing to support the Shiv Sena to form the government but the two parties are yet to give any concrete assurance to Uddhav Thackeray's party.

Congress sources said that Sonia Gandhi wants a commitment from Sena that the party will give up its hardline Hindutva agenda before giving support to Uddhav Thackeray-led party to form the government.

The NCP is also engaged in hectic parleys with both the Congress and Shiv Sena leaders but its chief Pawar, who is known for his political acumen, is still non-committal on supporting the Shiv Sena-led government in Maharashtra.

Pawar had raised eyebrows on Monday (November 18) when he said at a press conference that the responsibility to form the government lies with the BJP and Shiv Sena and the Congress and the NCP are not thinking too much over this matter.

Notably, the BJP and Shiv Sena contested the October 21 Assembly polls together with the BJP finishing as the single largest party after winning 105 seats.

The Shiv Sena ended at second place after winning 56 seats in 288-member Maharashtra Assembly. However, the BJP-Shiv Sena failed to form the government as Sena chief Uddhav Thackeray demanded rotational chief ministerial post, a demand rejected by the BJP.

The Congress and the NCP contested the Assembly election as allies with the NCP winning 54 seats, while the Congress bagged 44.