Nikki Haley, the highest ranking Indian-American official in the Donald Trump administration, is all set to visit India for two-days from Tuesday. 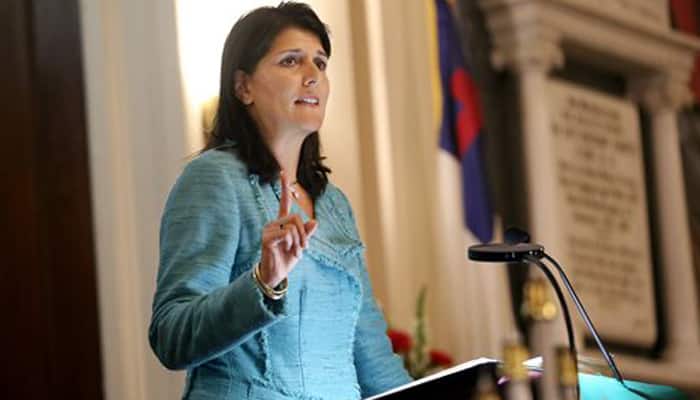 NEW DELHI: Nikki Haley, the highest ranking Indian-American official in the Donald Trump administration, is all set to visit India for two-days from Tuesday.

The US Ambassador to the United Nations will meet senior government officials, including members of Ministry of External Affairs, and NGO representatives from June 26-28 in an effort to develop strong ties with India.

Haley is expected to hold talks on a host of topics including India-US strategic ties and significant global developments. She will also meet the interfaith community "to underscore the United States' shared values and strong alliance with the people of India," a brief media advisory from the US Mission to the UN said.

It is still not clear if Haley will meet Prime Minister Narendra Modi. She will also deliver remarks to a group of business and government leaders, students, and civil society on advancing US-India relations.

The 46-year-old's visit to India comes just days before US Secretary of State Michael Pompeo and Secretary of Defense James Mattis will host External Affairs Minister Sushma Swaraj and Minister of Defense Nirmala Sitharaman in Washington for the inaugural US-India 2+2 Dialogue on July 6.

Haley had visited India in late 2014 when she was the South Carolina Governor.
Haley, the daughter of Sikh immigrants from Punjab, is the first Indian-American to serve in a Cabinet-level position in any US presidential administration.