No one will be left behind due to one's religion: PM Narendra Modi at Aligarh Muslim University centenary celebrations

PM Modi urged the 100 hostels of AMU to perform an extracurricular task on this occasion of 100 years, 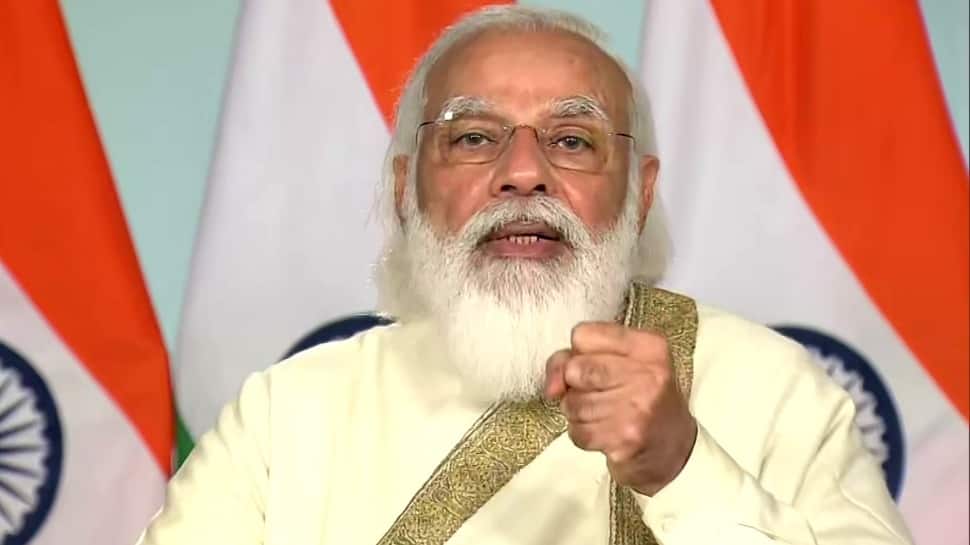 New Delhi: Prime Minister Narendra Modi on Tuesday (December 22, 2020) addressed the centenary celebrations of the Aligarh Muslim University and stated that no one will be left behind due to one's religion.

PM Modi during a video conference address said, "The country is proceeding on a path where every citizen is assured of his or her constitution-given rights, no one should be left behind due one's religion and this is the basis of the pledge 'sabka saath, sabka vikas, sabka vishwas'."

Speaking on the occasion, Prime Minister Modi also recalled Sir Sayyad's remark that the 'the first and foremost duty of one who is concerned about his country is to work for the welfare of all people. Irrespective of the caste, creed or religion.'

PM Modi gave examples of the government schemes providing benefits without any discrimination.

He added, "Country’s resources belong to each and every citizen and should benefit all. Our government is working with this understanding."

PM said that the vision of new India envisages that the development of the nation and society should not be seen from a political angle and asked to be vigilant against misleading propaganda and keep the interest of the nation supreme in one's heart.

"Politics can wait but society can not, similarly poor belonging to whichever section, can not wait. We can not waste time and should work together to create an Aatamnirbhar Bharat. For the attainment of national goals, all differences must be set aside," PM Modi added.

He also lauded the Aligarh Muslim University for the unprecedented contribution to the society during the COVID-19 pandemic.

PM said, "Getting thousands of people to do free tests, building isolation wards, building plasma banks and contributing a large amount to the PM Care Fund shows the seriousness of fulfilling your obligations to society."

The Prime Minister said that in the last 100 years, AMU has also worked to strengthen India's relations with many countries of the world.

"The research is done here on Urdu, Arabic and Persian languages, research on Islamic literature, gives new energy to India's cultural relations with the entire Islamic world. The University has the double responsibility to further enhance the soft power of the university as well as fulfilling the obligation of nation-building," said PM Modi.

The Prime Minister also recalled a time when the drop out rate of Muslim daughters was more than 70 per cent due to lack of toilets and stated that the government built separate toilets for the school-going girl students in mission mode under Swachh Bharat Mission.

PM Modi said the country took forward the efforts to build a modern Muslim society by ending the practice of triple talaq and said, "Earlier, it was said that if a woman is educated then the whole family gets educated. Education brings with it employment and entrepreneurship. Employment and entrepreneurship bring with them economic independence. Empowerment comes from economic independence. An empowered woman contributes equally to every decision, at every level, as much as anyone else."

He urged the 100 hostels of AMU to perform an extracurricular task on this occasion of 100 years, in line with the 75th anniversary of India’s freedom, to research about the lesser-known freedom fighters.