Functionaries of different wings of the ruling Congress and the DMK have also joined the protest. 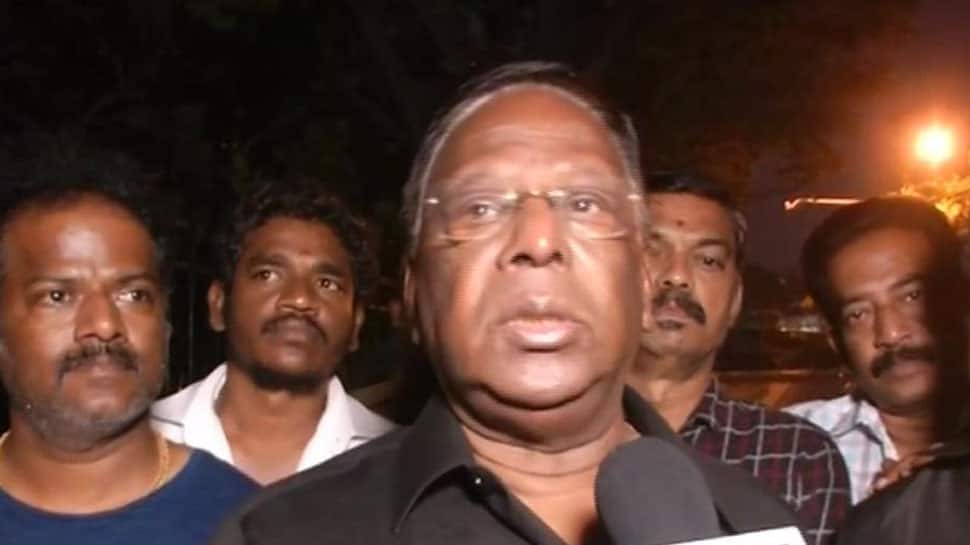 Puducherry: Puducherry Chief Minister V Narayanasamy, on a dharna outside the Raj Nivas here along with his ministerial colleagues for the last three days protesting Lt Governor Kiran Bedi's "negative stand" towards his government's proposals awaiting her approval, urged supporters on Saturday to ensure that law and order is not disrupted.

He also said as part of widening the agitation, stirs would be held at constituency level from Saturday. Functionaries of different wings of the ruling Congress and the DMK have also joined the protest.

"We have selected 12 centres spread across 23 Assembly segments in Puducherry where the leaders and MLAs along with workers of parties belonging to the secular front would hold agitations in a peaceful manner," Narayanasamy said.

As part of the stir, black flags would be hoisted atop houses of leaders. Workers of the Congress party and its alliance partners in all Assembly segments on Sunday would protest "unanimously" against the "style of functioning" of Bedi, he said.

Calling on workers and others supporting the dharna to ensure that there is no disruption of law and order, the chief minister said, "Neither the Centre nor Kiran Bedi should get an opportunity to blame us on any count."

"The Central government is opposed to the territorial administration and hence we should tread a careful path," he said.

Narayanasamy told reporters at the venue of agitation last night that he and his ministers would continue the stir till a "positive reply is available from the Lt Governor" to the various proposals, including a free rice scheme, the cabinet had forwarded to her.

"These proposals relating to welfare schemes and various administrative issues have been hanging in the balance for several months," he said.
A massive fast would be observed by all leaders and workers in front of the Head Post office here on February 21.

The chief minister also criticised the Lt Governor for "disrespecting" the people of Puducherry and also an elected government by leaving for Delhi a day after the agitation was launched.

Bedi had left for New Delhi early on Thursday morning under tight security of the Rapid Action Force (RAF). A source in the Raj Nivas had told PTI that she would return on February 20 and has invited the chief minister for discussion over the issues raised by him on February 21.

The Lt Governor and the government headed by Narayanasamy have been at loggerheads over various issues ever since Bedi assumed office in May 2016.

Narayanasamy had led an agitation in front of Parliament on January 4, demanding that the Centre sanction statehood for Puducherry and replace Kiran Bedi as the Lt Governor.

Pulwama attack: Here's how you can donate to help families of martyrs