As many as 1.31 lakh pilgrims have completed Amarnath Yatra within 10 days of commencement, despite terror threats in Jammu and Kashmir valley. 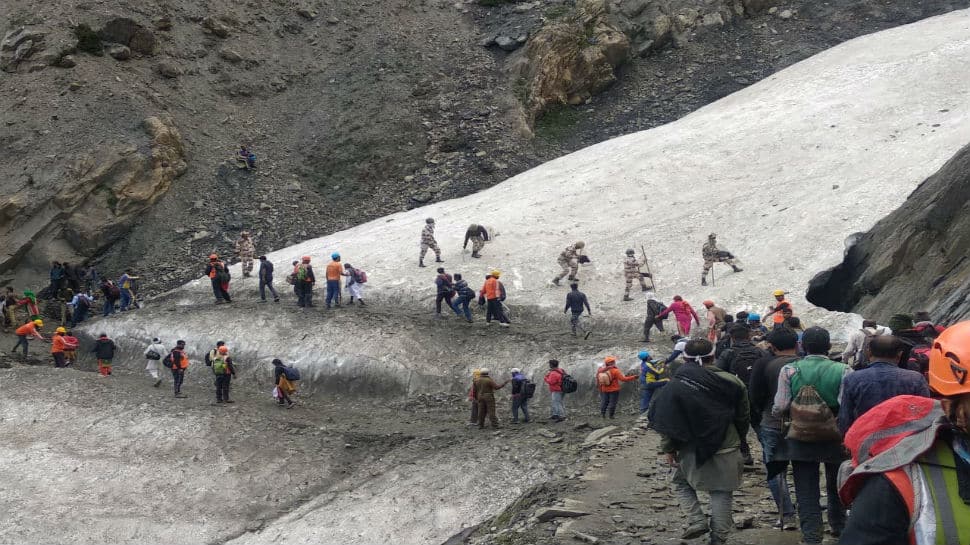 Srinagar: As many as 1.31 lakh pilgrims have completed Amarnath Yatra within 10 days of commencement, despite terror threats in Jammu and Kashmir valley.

Tight security arrangements and facilities provided by the Amarnath Shrine Board in affiliation with the Centre have been listed as the main reason by the pilgrims for the massive turn-up.

The 45-day long Hindu pilgrimage to the Amarnath Cave shrine started on July 1 and will end on August 15, coinciding with the Shravan Purnima festival.

Notably, this year, several new measures have been introduced, including usage of drones, CCTVs and the development of a mobile app so that the passage of pilgrims can be tracked constantly and assistance be provided if needed.

Helicopter services are available for the pilgrims at both the base camps.

Faith and belief took over an ounce of uncertainty in the pilgrims' mind. Pilgrims were fearing the Yatra this year in the aftermath of the deadly Pulwama suicide attack which killed 40 Central Reserve Police Force (CRPF) personnel and the recent terror attack in south Kashmir's Anantnag district which claimed the lives of five CRPF men.

However, after getting to know about heavy security arrangements done by the Centre to ensure the safety of the pilgrims, people were encouraged to embark on the Yatra in large numbers, a pilgrim said.

Along with the security, the measures taken to prevent any weather anomaly by the disaster management teams deployed on both routes eased people's fears away.

Praising central government's efforts in ensuring the safe conduct of the pilgrimage, a returning pilgrim Ajay Singh said, "Good facilities, Army and police force deployment has made us feel safe. If a person feels safe, they will definitely come out in large numbers."

Rahul Singh, who took the Yatra for the first time, said, "The valley will be buzzing with pilgrims till August 15. Hope the government will keep on doing the good work. They have taken care of necessities like food and cleanliness. The disaster response team is quick to rescue in case of a landslide."

Keeping the recent terror attacks in the valley in mind, the Centre has left no stone unturned to ensure the safety of the pilgrims. ITBP personnel, along with CRPF, J&K Police, Border Security Force (BSF) and the Indian Army, have been deployed at various points on the twin routes to the ancient cave shrine.

In his visit to the valley state, Home Minister Shah held talks over the security arrangements for Amarnath Yatra and ordered all security agencies to remain on high alert and take all steps to prevent acts of violence during the annual pilgrimage.