While the flood water is receding from most states, the IMD has warned of heavy rainfall over the next five days in several places. 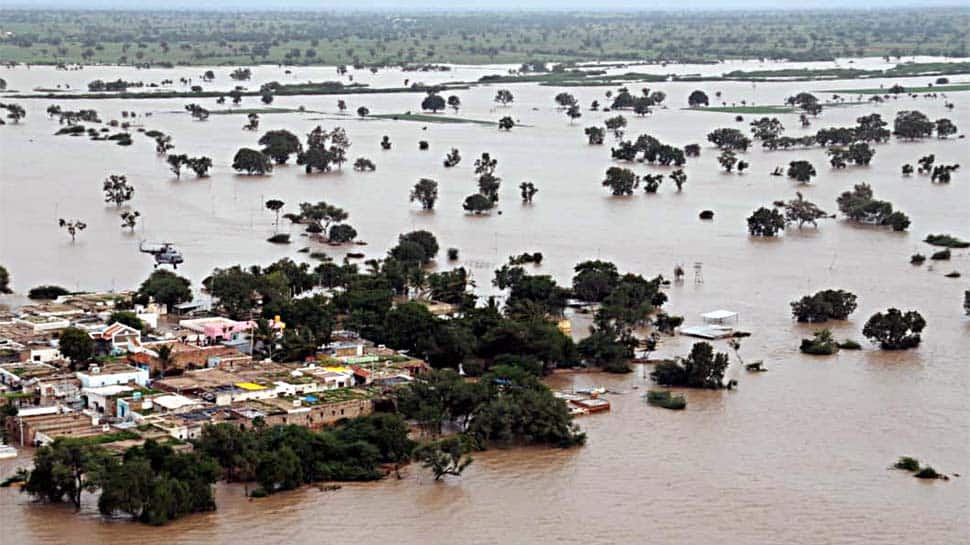 At least 91 people have lost their lives while 59 others are still missing across 14 districts of the flood-battered Kerala. The IMD has issued a red alert in three districts--Alappuzha, Ernakulam and Idukki, along with an Orange alert in nine other districts. It has also predicted heavy rains across most parts of the state. “The Government is trying to provide whatever relief is possible, to those in distress, and to the family members of the deceased. Across the state, 91 deaths have been reported till this evening. 224,506 people are currently being catered to, in 1,243 relief camps,” tweeted Chief Minister  Pinarayi Vijayan who visited the flood-affected areas on Tuesday. Of the 14 flood-battered districts in Kerala, Malappuram is the worst hit with the highest death toll of 31, followed by Kozhikode with 17 deaths and Wayanad with 12 deaths. A total of 1,239 relief camps in the state is currently providing shelter to over two lakh people. whose lives have been affected by the floods.

“According to the UN estimate, it will need Rs 31,000 crore to overcome this crisis,” the CM said in a tweet.

At least 54 people have died and 12 others are missing, official data said on Tuesday. Over 4 lakh people have been rescued so far. As many as 1,224 relief camps are currently operational in the state with 3,93,956 people taking shelter in them. The IMD has predicted heavy rains in all districts of coastal Karnataka and in Chikkamagaluru, Hassan, Kodagu and Shivamogga districts of South Interior Karnataka.

Karnataka Chief Minister BS Yediyurappa has sought Rs 10,000 crore for flood-relief work from Centre. “Situation is very bad. Home Minister Amit Shah and Finance Minister Nirmala Sitharaman also conducted an inspection. Loss of over 50,000 crore in the state. On August 16, I'm going to Delhi to meet PM regarding this,” he said, adding, “I request Government of India to release 10,000 crore immediately.”

Death toll in Maharashtra floods touched 48 on Tuesday, while three persons are still missing. According to the India Meteorological Department (IMD), the offshore trough at mean sea level from Maharashtra coast still persists. According to Pune Divisional Commissioner`s office, over 4.74 people were rescued from 584 villagers and evacuated to temporary 596 shelters in Pune, Sangli, Kolhapur, Satara and Solapur districts.

In Bihar, the floods triggered by heavy and incessant rains took the death toll to 123 across the state. A total of 81.57 lakh people have been affected across 12 districts. The most affected district is Sitamarhi with a total of 37 deaths, followed by Madhubani with 30 deaths. The death toll in Araria reached at 12, Sheohar and Darbhanga at ten each, Purnea at nine, Kishanganj at five, Muzaffarpur at four, Supaul at three, East Champaran at two, and Saharsa at one. The situation has improved but the relief work continues across the state.

Heavy rains and flood-like situation claimed 71 lives and affected 19 districts in Assam. At least 28 lakh people have been affected due to the floods. The situation has improved in the state over the past few days.

At least eight people were killed due to the heavy rain and floods in Odisha. The deaths were reported from the districts of Nabarangpur, Kalahandi, Kandhamal, Koraput and Malkangiri,
According to Special Relief Commissioner (SRC) Bishnupada Sethi, 11.5 lakh cusec flood water is likely to be discharged at Mundali on August 15 between 6 am to 10 am. A warning letter to 11 Collectors across Bolangir, Subarnapur, Boudh, Angul, Nayagarh, Cuttack, Khordha, Jagatsinghpur, Puri, Kendrapada and Jajpur districts have been released.

A flood-like situation was also witnessed in Tarabha area of Sonepur following incessant rainfall which washed away five houses.

At least six persons died in due to frequent cloudbursts and rain in Uttarakhand's Chamoli district. According to the State Disaster Response Force (SDRF), three deaths were reported from Lakhee village, while two persons lost their lives in Banjbagar village. Another death was reported from Auli village. Several houses were washed away. Amid incessant rainfall in the state, the Ganges on Monday was flowing close to the danger mark of 339.50 metres at Rishikesh, putting the administration in the temple town on alert.

Two persons died and three sustained injuries after a tree got uprooted due to heavy rain and fell on their shed in the Rampur area, reported news agency ANI. The IMD has forecasted heavy rainfall during the next week in the state. A warning has also been issued for Kangra, Chamba, Una, Mandi and Bilaspur.

'Invitation' war over J&K continues as Rahul Gandhi asks Governor Malik 'when can I come?'