Pakistani army has put up a banner inside the Kartarpur Sahib Gurudwara premises, which falsely states that "Indian Air Force had in 1971 dropped a bomb at Gurudwara Darbar Sahib Sri Kartarpur Sahib with an aim to destroy it."

New Delhi: Ahead of the historic occasion of Kartarpur Corridor inauguration, Pakistan has come up with yet another hate propaganda to instigate the Sikh community against India. Sources on Thursday revealed the Pakistani army has put up a banner inside the Kartarpur Sahib Gurudwara premises, which falsely states that "Indian Air Force had in 1971 dropped a bomb at Gurudwara Darbar Sahib Sri Kartarpur Sahib with an aim to destroy it."

Pakistan has also mentioned that the so-called "bomb landed into the sacred well which was used by Guru Nanak Dev."

"Indian Air Force dropped this bomb during 1971 at Gurudwara Darbar Sahib Sri Kartarpur Sahib with the aim to destroy it. However, this evil design could not be materialised due to the blessings of Waheguru ji (Almighty Allah). The said bomb landed into Sri Khoo Sahib (sacred well) and Darbar Sahib remained unhurt. It is pertinent to mention that this is the same sacred well from where Sri Guru Nanak Dev Ji used to get water to irrigate his fields," reads the text on the banner. 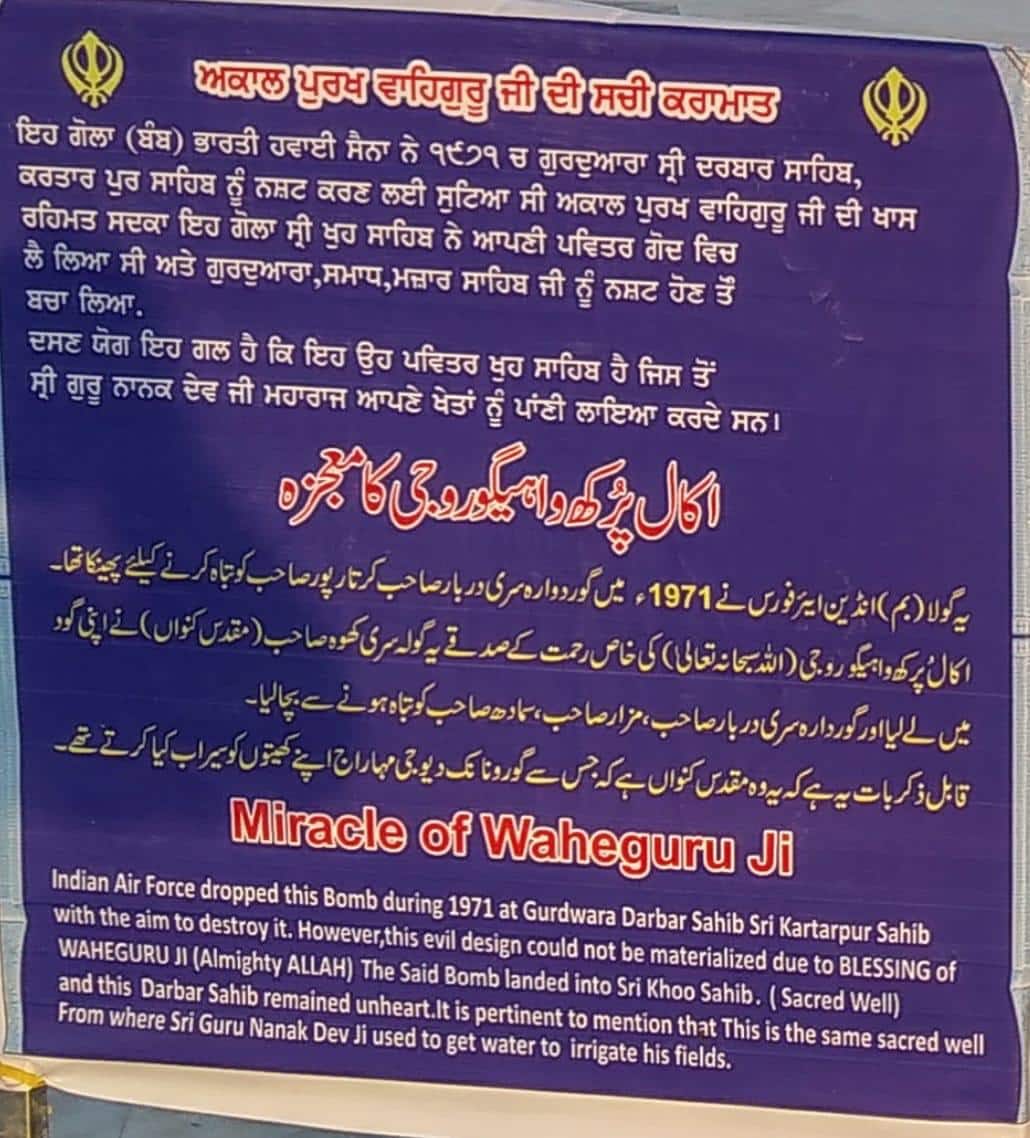 The shocking statement is just one of the many hate propaganda by Pakistan, which they have done in the past too.

The false accusations by Pakistan clearly reveal how much the country has stooped down to malign India's image.

Meanwhile, on Thursday, Pakistan tried to create confusion in connection with the visit to Kartapur Sahib too.

Pakistan has been changing its stand on who all can visit Kartarpur Sahib by stating that Indian pilgrims will not require passports to visit the shrine and only a valid identity proof will do and then coming out with another statement that only those with valid passports can do so.

On one hand, Pakistan Prime Minister Imran Khan has tweeted that no passport is required for those visiting Kartarpur Sahib, but Major General Asif Ghafoor, the Pakistani Army spokesperson and Director-General of its Inter-Services Public Relations, stated that pilgrims would require a passport.

Thus, to avert any issues in the future, the Central Government clearly stated that only Indians with a valid passport will be allowed to visit Kartarpur Sahib Gurudwara in Pakistan's Punjab province.

The Kartarpur corridor will be inaugurated on Saturday ahead of the 550th birth anniversary of Baba Guru Nanak Dev, the founder of Sikhism. Prime Minister Narendra Modi will inaugurate the corridor from the Indian side while his Pakistani counterpart Imran Khan will inaugurate it from Pakistan.