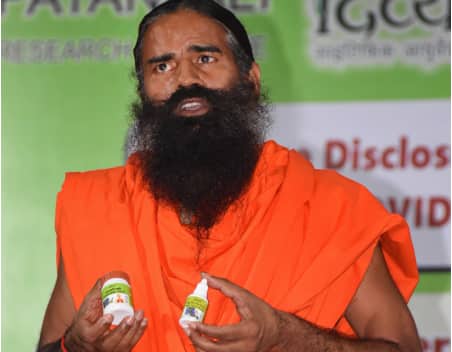 New Delhi: Uttarakhand's AYUSH Minister Harak Singh Rawat on Wednesday (June 24) said that Patanjali Divya Pharmacy was given the permission to make immunity booster medicine. The minister further said the Department of AYUSH is taking information from Patanjali Ayurved as to who or from where did it get permission for clinical trials of the drug that it has launched on Tuesday.

Rawat said the state government will give details in this regard to the Union AYUSH ministry, adding if Baba Ramdev took permission from other state then he is not aware of that.

"As per Patanjali's application, we issued them license. They didn't mention coronavirus, we only approved license for immunity booster, cough, and fever. We'll issue them a notice asking how they got permission to make the kit (for COVID-19)," a statement issued by Licence Officer, Uttarakhand Ayurved Department, said.

The Ayush Ministry of Uttarakhand on Tuesday also clarified that the licence issued was not to find a cure for coronavirus, but only for the production of immunity booster kits and fever medicine.

Dr YS Rawat, Joint Director State Medicinal Licensing Authority from Uttarakhand said, "The license was issued only for immunity booster kits and fever medicine. But now that it has come to the attention of the AYUSH department, a notice will be issued to Divya Pharmacy. If their reply is not satisfactory then their current licenses will be canceled."

The Ministry said that it has taken cognizance of news media reports about Patanjali Ayurved Ltd, Haridwar developing Ayurvedic medicines for the treatment of COVID-19, and added that the company has been asked to "stop advertising/publicising such claims till the issue is duly examined".

On Tuesday, Baba Ramdev launched 'Coronil' by claiming that it is the Ayurvedic medicine for COVID-19, adding that this medicine has cured COVID-19 diagnosed patients. He further said that patients can be cured in just one week with the use of 'coronil' medicine.

Patanjali Yogpeeth also stated that 'coronil' medicine will be available all over the country by next week.

MoS for the Union Ayush Ministry Shripad Naik today said that his ministry will clear its stance on pharmaceutical giant Patanjali`s newly-launched ayurvedic drugs `Coronil and Swasari` for the novel coronavirus after reviewing the report sent by it.

The Minister told ANI, "It is a good thing that Baba Ramdev has given a new medicine to the country but as per rule, it has to come to AYUSH Ministry first. They even said that they have sent a report. We will look into it and permission will be given after seeing the report."

On Tuesday, the Union AYUSH Ministry had said that it has taken cognizance of news in the media about Ayurvedic medicines developed for the treatment of COVID-19 by Patanjali Ayurved Ltd, Haridwar and said the company has been asked to "stop advertising/publicising such claims till the issue is duly examined".