Payal Tadvi had committed suicide on May 22 after allegedly facing casteist slurs. 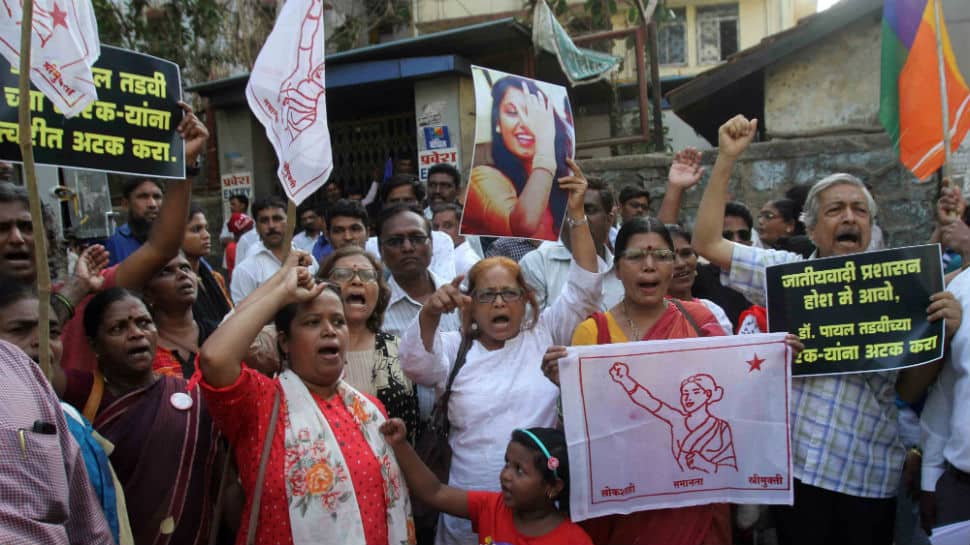 Protest demonstration against the suicide by Dr Payal Tadvi of Nair Hospital in Mumbai on Monday (Image courtesy: ANI)
Share:
Written By:

Mumbai: The administration of Mumbai's BYL Nair Hospital has suspended the head of the gynaecology department and three other women doctors in connection with Dr Payal Salman Tadvi's suicide case. The three doctors have been booked under the Atrocities Act, the Anti-Ragging Act and the IT Act and Section 306 (abetment to suicide) of the IPC.

The three doctors - Hema Ahuja, Bhakti Mehere and Ankita Khandelwal -were earlier absconding while a showcause notice was issued to the head of gynaecology department Yi Ching Ling.

Payal Tadvi had committed suicide on May 22 after she allegedly faced casteist slurs.

Her family also alleged that the doctors insulted her for belonging to a scheduled tribe. She was a second-year post-graduate student in obstetrics and gynaecology. The 25-year-old doctor hailed from a Muslim tribal family of Jalgaon. She and her family had in the past complained to the hospital authorities of the alleged ragging, taunting on her tribal status and other forms of harassment by the three senior women doctors.

Dr Tadvi's friends had appealed to the authorities to take stringent administrative and penal action against the accused.

Amid growing protests by students and tribal organisations, the state women's commission on Monday asked the Dean to submit a report in the case.

In a letter to the Dean of the Mumbai civic body-run BYL Nair Hospital Ramesh Bharmal, the Maharashtra State Commission for Women sought to know whether the Anti-ragging Act was effectively implemented in the institution.

The report, which also seeks information on "lack of communication" between the administration and students, is to be submitted within eight days, the Commission said.