Petrol, diesel prices to cost more in Uttar Pradesh after hike in VAT

A litre of petrol will now cost 98 paise more across the state while a litre of diesel has become dearer by Rs 2.35.

Petrol and diesel will cost more in Uttar Pradesh from Tuesday (August 20) after the state government hiked Value Added Tax (VAT) on the two fuels.

A litre of petrol will now cost 98 paise more across the state while a litre of diesel has become dearer by Rs 2.35. The rise in prices of the fuels comes after the state government decided to increase VAT on petrol to 26.80% while that on diesel to 17.48%. The new and hiked prices came into effect at midnight between Monday and Tuesday. 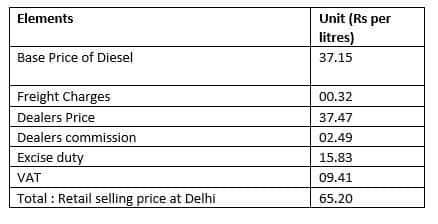 The hike in prices is unlikely to go down well with commuters as it could have a cascading effect on household budgets. Even transporters may not be too pleased about paying higher rates for fuels and it could translate into hike in prices of commodities.

In the Union Budget earlier in 2019, prices of petrol were increased y Rs 2.5 per litre and that of diesel by Rs 2.3 after an increase in excise duty and road and infrastructure cess.

This effectively means that UP has seen fuel prices shoot up significantly in 2019.

In the past, there have been concerns of pump owners in cities close to the National Capital Region that people would start crossing into Delhi to tank up if rates there are significantly cheaper.