Photo of AIIMS doctors paying their last respects to Atal Bihari Vajpayee circulating on social media; but the truth is something else 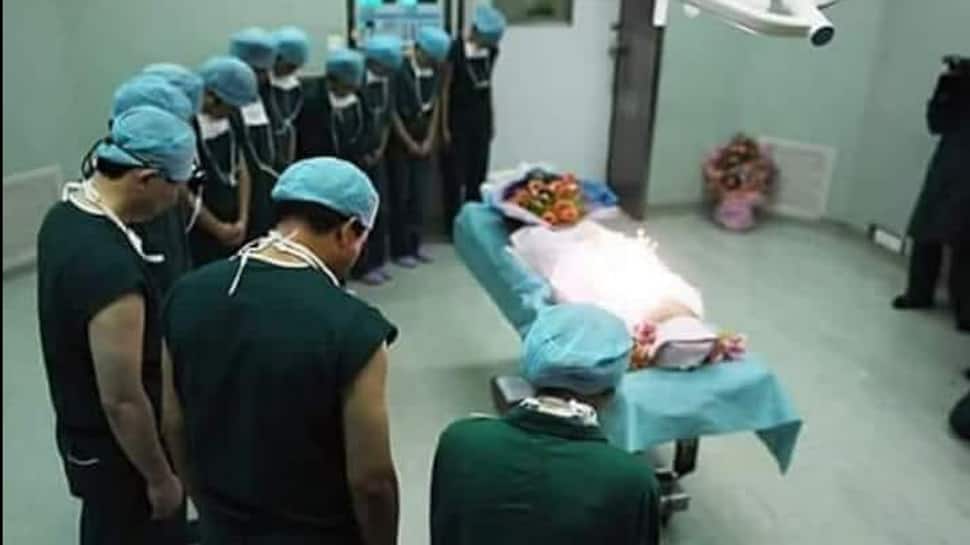 Former prime minister Atal Bihari Vajpayee on Thursday evening breathed his last at the All India Institute of Medical Sciences (AIIMS) in New Delhi. Hours after the death of the stalwart, a picture claiming to be of AIIMS doctors paying tribute to the former leader began circulating in the social media.

The picture baffled the people who considered it to be a real picture from inside the hospital after the death of the former prime minister.

However, it was later verified to be a picture from the year 2012 of a group of Chinese doctors paying tribute to a patient whose organ were donated after her death. In the picture, the doctors stood in a queue and offered their last respect.

Atal Bihari Vajpayee breathed his last at 5.05 pm on Thursday and the same was confirmed by AIIMS through an official press release. Elaborate arrangements were made at the hospital as well as the residence of the former prime minister before the announcement of Vajpayee’s demise was made by the hospital.

“It is with profound grief that we inform about the sad demise of Former Prime Minister of India, Shri Atal Bihari Vajpayee at 05:05pm on 16.08.2018. Shri Vajpayee was admitted in AIIMS on 11.06.2018 and was stable in the last 9 weeks under the care of a team of AIIMS doctors,” read the statement released by AIIMS.

It further read, “Unfortunately, his condition deteriorated over the last 36 hours and he was put on life support systems. Despite the best of efforts, we have lost him today. We join the Nation in deeply mourning this great loss.”

The mortal remains of the BJP co-founder was taken from the hospital to his residence, where political leaders from across the country converged to pay their last respects to the iconic leader. From Prime Minister Modi to Sonia Gandhi, West Bengal Chief Minister Mamata Banerjee to Bihar CM Nitish Kumar, several big names of the Indian polity reached Vajpayee’s residence soon after the news of his demise came in.

The mortal remains will be kept at BJP headquarters for the general public to pay their last respect from 9 am to 1 pm on Friday, following which the final journey of the former prime minister would begin. He will be accorded a state funeral at 4 pm on Friday at Smriti Sthal in the national capital.

Zeenews.com, too, had inadvertently used the photo saying it was of AIIMS doctors. But the error has been rectified. We sincerely regret the error.