PM Modi apologises for late lunch due to him, schoolgirl charms with her witty reply - Watch

The PM arrived at the venue in a special chopper at 12 noon and was greeted with loud cheers as he walked on to the stage. However 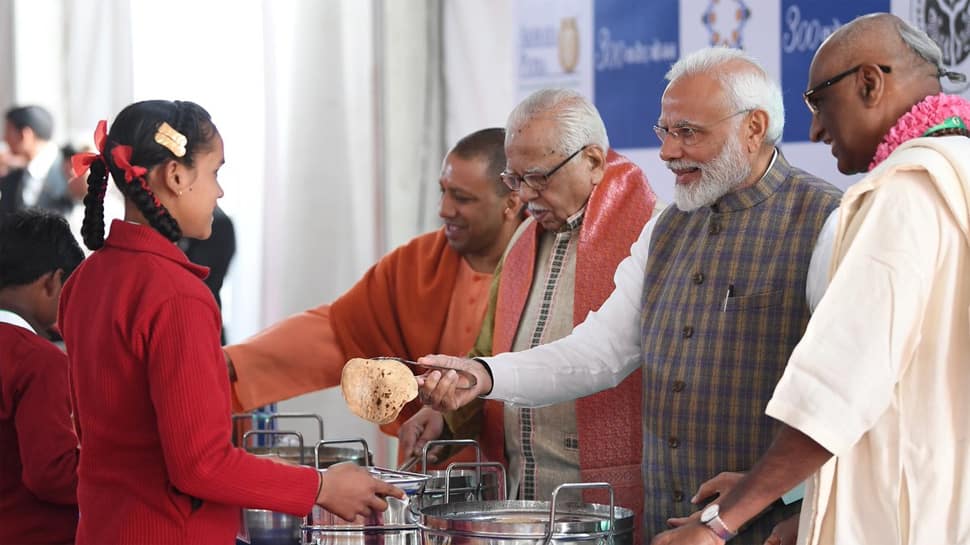 VRINDAVAN: Prime Minister Narendra Modi on Monday served the 300th meal by the Akshaya Patra Foundation to a group of underprivileged schoolchildren in Vrindavan. Speaking at the event he said: "First thali through this NGO was served by former prime minister Atal Bihari Vajpayee and "I feel fortunate to serve the third billionth thali today."

The PM arrived at the venue in a special chopper at 12 noon and was greeted with loud cheers as he walked on to the stage. However, in a one-on-one interaction, he apologised to the children for coming late and serving a late lunch.

"It's 1:30 right now and the food should have been served at 12 noon. Because the Prime Minister came late, your food also got delayed, right? (Dedh baj raha hain... Barah baje milna chahiye tha khaana. Der se aaya Pradhan Mantri, aapka khaana late ho gaya, haina?)," he can be heard asking the children who were having the meal.

While most of the kids started giggling, one schoolgirl made the PM laugh with her witty reply.  "We ate before we came. (Hum subah khaake aye they)," she said.

Had a good conversation with the children. They didn’t mind the late lunch :) #AkshayPatra

The PM shared the video on Instagram with a caption: "Had a good conversation with the children. They didn’t mind the late lunch :)"

Modi posted another video clip of him serving food saying: "Had the honour of serving food to children in Vrindavan today".

Had the honour of serving food to children in Vrindavan today. pic.twitter.com/Fs7esScQZA

The menu was roti, paneer vegetable, choley, pulao, pakoda, sprouts salad and gajar ka halwa, a spokesperson of the NGO said. He even spoon-fed a few children and blessed them.