PM Modi in J&K's Rajouri to celebrate Diwali with jawans, first visit to valley after revocation of Article 370

Following his tradition on the auspicious occasion of Diwali, Prime Minister Narendra Modi on Sunday reached Jammu and Kashmir's Rajauri district to celebrate Diwali with the valorous soldiers of the Army, guarding the Line of Control (LoC) in the newly-formed Union Territory. 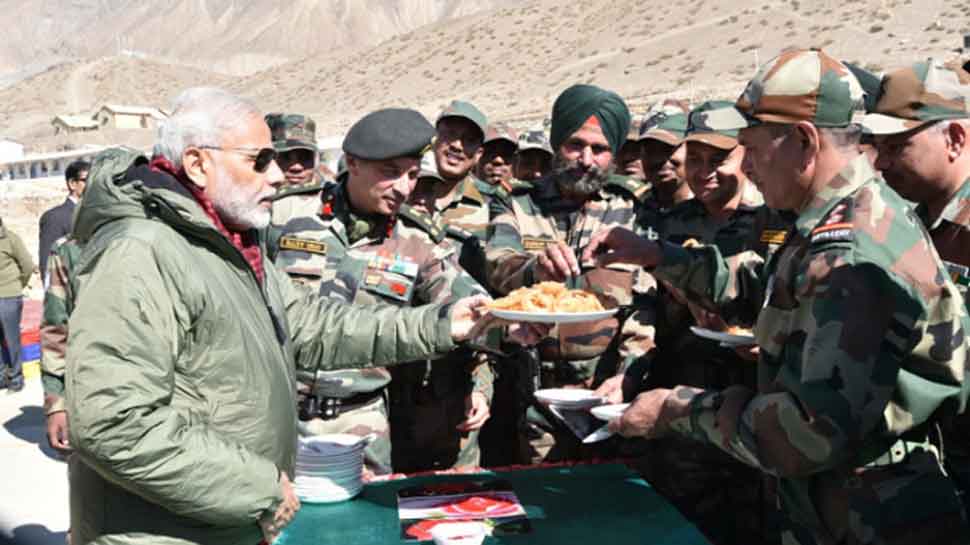 PM Modi celebrated Diwali with soldiers in Himachal Pradesh in 2016
Share:
Reported By:

Srinagar: Following his tradition on the auspicious occasion of Diwali, Prime Minister Narendra Modi on Sunday reached Jammu and Kashmir's Rajouri district to celebrate Diwali with the valorous soldiers of the Army, guarding the Line of Control (LoC) in the newly-formed Union Territory.

PM Modi arrived in Rajouri at around 12 pm on Sunday, shortly after wrapping up his monthly address on his radio broadcast programme 'Mann Ki Baat'. This is PM Modi's first visit to the Kashmir valley after the central government revoked Article 370 and Article 35A which granted special status to the erstwhile state.

The prime minister's visit coincided with Infantry Day celebrations, which is observed to mark the landing of first Indian troops in Jammu and Kashmir in 1947 to push back Pakistan-supported intruders.

This is for the sixth time that PM Modi has visited Jammu and Kashmir to celebrate Diwali with the troops in the border state since 2014. PM Modi had started the practice of interacting with troops serving in tough areas on Diwali soon after taking over as the prime minister in 2014 when he had spent his Diwali at Siachen in Ladakh region with the jawans, besides visiting the flood victims in Srinagar.

In 2018, PM Modi had celebrated Diwali with ITBP personnel stationed on the India-China border. During his address in 2018, PM Modi had said, "His passion for doing duty on snowy mountains in far-flung areas makes the nation's strength stronger."

In 2017, PM Modi celebrated his Diwali with the soldiers in Jammu and Kashmir's Gurez valley. Earlier in the year 2016, PM Modi visited Himachal Pradesh where he spent time with the ITBP police personnel at a security post. In the year 2015, he went to the Punjab border on Diwali.