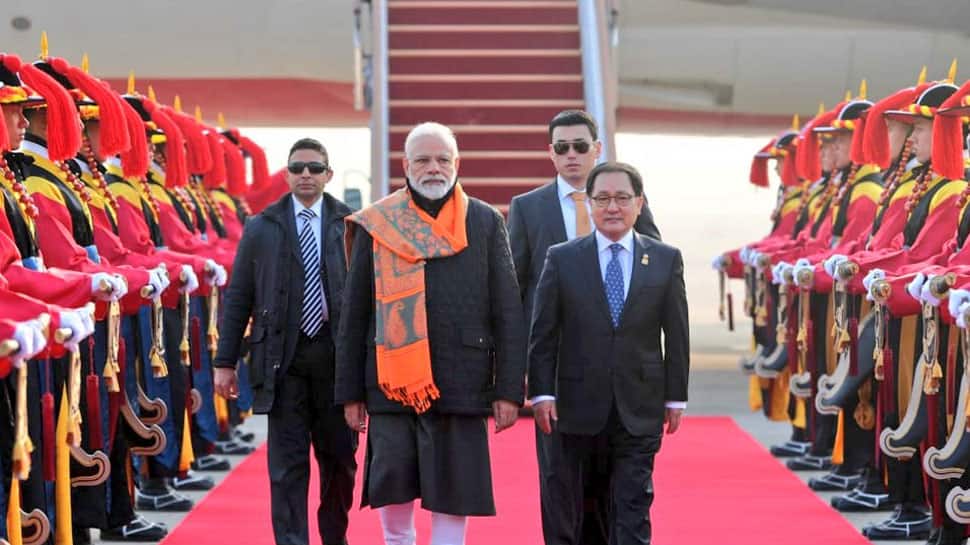 SEOUL: Prime Minister Narendra Modi on Thursday arrived in South Korea on a two-day official visit during which the two countries will seek to enhance cooperation in diverse areas, including trade and investment.

PM Modi was recieved by top South Korean officials at the airport.

South Korea: Prime Minister Narendra Modi arrives in Seoul. He is on a two-day visit to the country. pic.twitter.com/h9zRzrnsTN

Upon his arrival in the South Asian country, PM Modi was given a rousing welcome by the Indian diaspora, which gathered in large number at Lotte Hotel in Seoul to welcome their leader.

The PM was greeted with 'Bharat Mata Ki Jai' and 'Vande Mataram' slogans by the members of the Indian community living in Seoul.

PM Modi responded by waving at the crowd gathered at the Lotte Hotel in Seoul.

#WATCH South Korea: Prime Minister Narendra Modi greets members of the Indian community at Lotte Hotel in Seoul. He is on a two-day visit to the country. pic.twitter.com/qTUCUEq7tc

Ahead of his departure from India, MEA Spokesperson Raveesh Kumar said the visit would strengthen India's special strategic partnership with South Korea and add dynamism to the Look East Policy.

"Continuing the momentum of high-level exchanges. PM @narendramodi emplanes for Seoul on a 2-day State Visit to the Republic of Korea," he tweeted.

Ahead of his visit, the PM described South Korea as an important partner for India's key initiatives such as 'Make in India' and said that as fellow democracies the two nations share values and vision for regional and global peace.

This will be his second visit to the Republic of Korea and the second summit meeting with President Moon.

In his departure statement, the PM said his visit is reflective of the importance "we both attach to our relationship".

"We regard the Republic of Korea as a valued friend, a nation with which we have a Special Strategic Partnership. As fellow democracies, India and the ROK have shared values and a shared vision for regional and global peace," said the PM.

"As fellow market economies, our needs and strengths are complementary. South Korea is an important partner for our 'Make in India' initiative as well as in our 'Start Up India' and 'Clean India' initiatives," PM Modi said.

"Our people to people ties and exchanges, as always, provide the bedrock of our ties of friendship. We were touched by President Moon's decision to send the First Lady as his special representative at the 'Deepotsav' Festival held in Ayodhya last November," he said.

The "growing depth and variety" in the relationship of the two countries has been accentuated by the harmony between New Delhi's Act East Policy and South Korea's New Southern Policy.

"Working together, we are determined to take our relationship forward as a 'future oriented partnership for People, Prosperity and Peace'," said PM Modi.

Swaraj, Wang to meet in China amid row over JeM chief Azhar's listing as global terrorist