The Prime Minister also hit out at the Congress for not participating in the meeting of floor leaders of all parties on COVID-19. 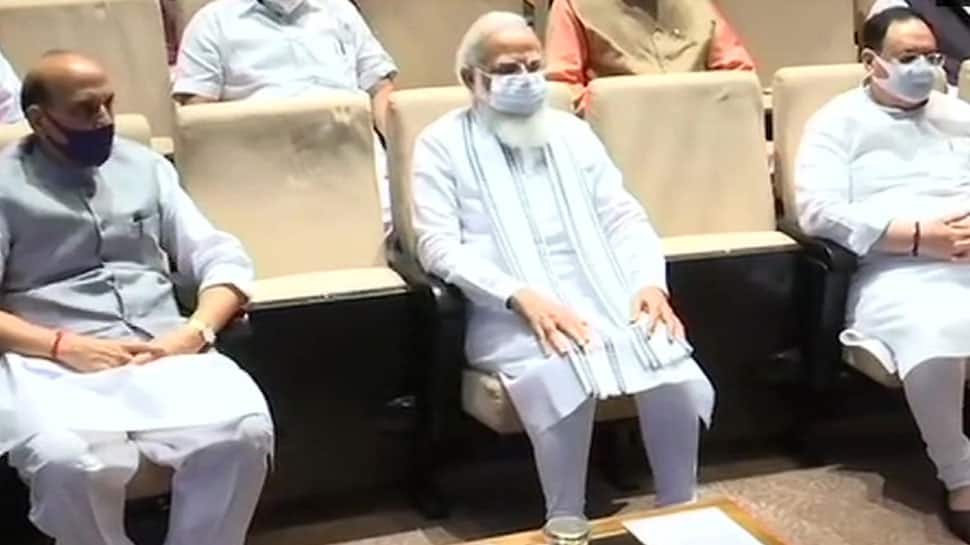 NEW DELHI: Prime Minister Narendra Modi on Tuesday hit out at the main opposition party - Congress - for not allowing the Parliament to function properly and causing repeated disruptions in both Houses during the ongoing Monsoon Session.

The Prime Minister said this while speaking at the BJP`s Parliamentary Party meeting on Tuesday.

Sources said, "The Prime Minister told the party MPs that the Congress party is deliberately disturbing the Parliament. They are neither interested in debate nor are allowing the parliament to function smoothly."

Delhi: BJP Parliamentary Party meeting is underway at Parliament on the Opposition's attempts to stall business during the monsoon session pic.twitter.com/VXToggLFW9

During his interaction with the BJP MPs, the PM blamed Congress for deliberately attempting to disrupt proceedings in Parliament, which is in Monsoon Session currently.

The Prime Minister also hit out at the Congress for not participating in the meeting of floor leaders of all parties on COVID-19.

The PM, while referring to the Congress party's boycott of last week’s all-party meeting to review the COVID-19 situation, said the party had also prevented others from attending it. He asked his party MPs to “expose this behaviour of the Congress and some opposition parties in front of the media and the public”.

On July 20, the Prime Minister had interacted with floor leaders of all parties of both Houses of the Parliament to inform them of the trajectory of COVID-19 and the public health response to the pandemic.

"The Prime Minister said that on one side, the Congress stops the functioning of the House and on the other hand, they did not turn up to attend the all-party meeting called on Covid. Their behaviour is against humanity. He asked MPs to expose the Congress among the people of India," sources said.

It is learnt that the Prime Minister asked the BJP MPs to celebrate the ‘Azadi Ka Amrit Mahotsav’ with public participation to mark 75 years of Independence so that it does not look like a government event.

"He asked people to suggest their ideas and vision for the next 25 years when the country will celebrate 100 years of Independence in 2047," another MP who was present in the meeting said.

The Narendra Modi government at the Centre is trying to push several new bills, including 3 to replace old ordinances, for passage in the ongoing Monsoon Session of Parliament, which began on a stormy note on July 19.

At least 23 bills have been listed by the Centre to be tabled in the Lok Sabha during the monsoon session. Of these, six bills have already been introduced and 17 of them will be new.

So far, the Monsoon Session has witnessed uproarious scenes with the Opposition trying to disrupt the house proceeding on several key issues including the Pegasus scandal, farmers’ protest, fuel price hike etc.