Prime Minister Narendra Modi is scheduled to chair a high-level meeting with the Ministry of Home Affairs (MHA) and National Disaster Management Authority (NDMA) on Monday (May 18) to review the situation due to a cyclonic threat in parts of coastal India. 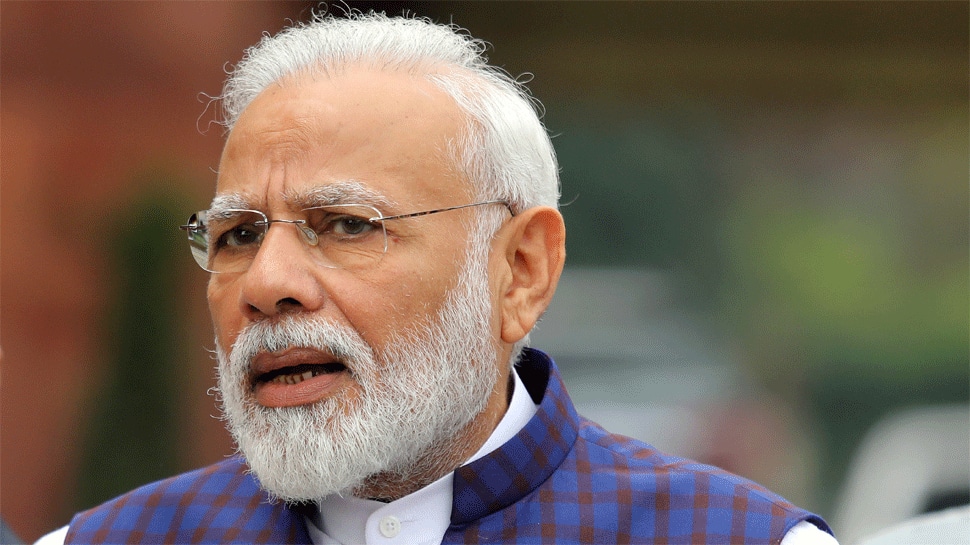 New Delhi: The India Meteorological Department (IMD) on Monday announced that Cyclone Amphan has intensified into a super cyclone and issued a warning of heavy rainfall for six states till May 21. The weather bureau said Odisha, West Bengal and its sub-Himalayan parts, Sikkim, Assam and Meghalaya will receive heavy rainfall till May 21.

Cyclone Amphan will the West Bengal and Bangladesh coasts as a very severe cyclone with a wind speed up to 185km per hour on Wednesday, said IMD.

Prime Minister Narendra Modi chaired a high-level meeting with the Ministry of Home Affairs (MHA) and National Disaster Management Authority (NDMA) on Monday (May 18) to review the situation due to a cyclonic threat in parts of coastal India. The meeting began at 4 pm today at the Prime Minister's official residence in the national capital. Union Home Minister Amit Shah, MHA officials, Home Secretary Ajay Bhalla and officials of NDMA ad NDRF are said to be present at the meeting.

Soon after the meeting, the PM wrote on Twitter that he prays for everyone's safety 'and assure all possible support from the central government.'

At the review meet, Modi took stock of the situation and reviewed the measures as well as the evacuation plan presented by the National Disaster Response Force (NDRF), a statement from the Prime Minister's Office said. "During the presentation of the response plan, DG NDRF (SN Pradhan) informed that 25 NDRF teams have been deployed on the ground while 12 others are ready in reserve. Twenty-four other NDRF teams are also on standby in different parts of the country," the statement said.

The Prime Minister said he "reviewed the preparedness regarding the situation due to cyclone Amphan. The response measures, as well as evacuation plans, were discussed."

Cyclone 'Amphan' intensified into a super cyclonic storm on Monday and is likely to move across the northeast Bay of Bengal, and cross the West Bengal and Bangladesh coasts between Digha and the Hatia island on May 20, the IMD said.

Heavy rain and winds caused massive destruction in Vaikom and surrounding areas of Kerala. Around one hundred houses were damaged after trees fell over it, caused by the storm. More than a hundred electricity posts were also damaged.

A portion of the Mahadeva temple was damaged in the heavy rains and wind. The rooftop tiles of temple Oottupura, Devaswom office, Committee office flew away in the storm.

An unspecified number of people were evacuated from coastal areas of Odisha where Jagatsinghpur, Kendrapara, Bhadrak and Balasore were likely to experience heavy rainfall accompanied by high-velocity winds. Official reports reaching Kolkata said 40,000 people have already been evacuated from South 24 Parganas district.

A senior government official said relief materials, dry food and tarpaulin have been dispatched to the coastal areas of Odisha. About 600 multi-purpose cyclone shelters and 7,092 other permanent buildings with cumulative capacity to accommodate nearly 12 lakh people have been identified in 12 districts of the state. It has also been directed to arrange adequate food, drinking water, lighting, sanitation and health facility at each shelter and keep the tower light and chainsaw and other emergency equipment ready to meet any eventuality.

Disruption of rail and road link are likely at several places but that will not have a major impact on human lives as only skeletal traffic ply the roads and railway tracks. Large-scale damage to communication and electricity lines, crops and houses is feared.

In an advisory to West Bengal and Odisha governments, the Union Home Ministry said that cyclone Amphan was spotted on Monday morning over central parts of South Bay of Bengal and the adjoining central Bay of Bengal. The cyclone is all set to unleash heavy rains coupled with high-velocity winds in coastal Odisha and Gangetic West Bengal.

While the Odisha government is preparing for a possible evacuation of 11 lakh people residing in vulnerable areas, the West Bengal government has issued an alert in coastal districts and sent relief teams.

The MeT department has issued an 'orange' warning for West Bengal, saying Cyclone Amphan is likely to cross the state in the afternoon or evening of May 20 as a very severe cyclonic storm with a maximum sustained wind speed of 155 to 165 kmph gusting to 185 kmph before losing some steam ahead of landfall.

Odisha Spl Relief Commissioner PK Jena said widespread rains are expected in coastal Odisha on Tuesday. On May 20, there could be heavy to very heavy rainfall in northern districts of Odisha, with wind speed reaching up to 110 kmph in certain parts Odisha.

Tamil Nadu to not face the impact of cyclone Amphan:

The Tamil Nadu government said that the state will not face the impact of the cyclone but it was constantly monitoring the situation along with IMD. Revenue Minister R B Udhayakumar said satellite images of the storm have been released.