Prime Minister Narendra Modi will on Friday kick-start the Making Of Developed India (MODI) Fest in Assam to mark the third anniversary of the BJP-led NDA government in power at the Centre. 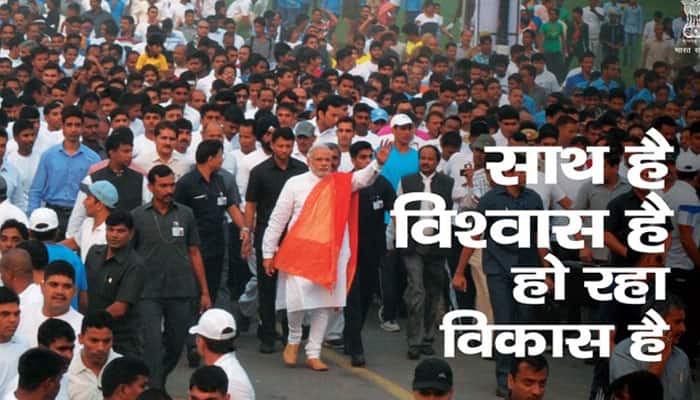 New Delhi: Prime Minister Narendra Modi on Friday sought people's feedback on the third anniversary of the BJP-led NDA government in power at the Centre.

The PM took to Twitter and sought people's feedback on his government's performance in the past three years.

What do you feel about the Govt? Where have we done well & where can we do even better. Join this survey on NM App. https://t.co/TYuxNNJfIf

Last 3 years have seen concrete steps that have transformed people’s lives. These graphics tell you how. https://t.co/8smEezyFds

The PM, who is in Assam, will also kick-start the Making Of Developed India (MODI) Fest to mark the third anniversary of the BJP-led NDA government in power at the Centre.

The high point of the celebrations will be a series of festivals, which allow the BJP to push the Prime Minister's name while also acronym-ing, a favourite tactic of the party.

All chief ministers of the BJP-ruled states and their deputies will participate in MODI Fest in the capital of their respective states.

Events will be held in about 900 cities across the country between today to June 15 to highlight the achievements in the three years of the central government.

The festivals will be organised by state governments; apart from presentations highlighting key government policies and accomplishments, caps and leaflets about large welfare schemes will be shared.

For its second anniversary last year, the government, having lost crucial elections in Delhi and Bihar, was a little subdued. This year, the outsize win in Uttar Pradesh and the popular support for demonetisation has led to a considerable scaling up of messaging.

Attacking those who question the government's performance, BJP chief Amit Shah said yesterday that they should first answer what they did while in power for decades.

Since the landslide victory in 2014, the BJP has performed well in the recently held state elections. The duo of PM Modi and BJP President Amit Shah stitched the most astonishing win in India's largest state- Uttar Pradesh- with 312 seats out of 403 seats.

UP is a state that gives hint which party would be forming next government at Centre.

An analysis of the nation's current mood portends that a perception continues to build in favour of Prime Minister Modi, who has taken several bold steps that don't suit a typical politician.

The demonetisation was one such step. The economic and political pundits may have reasons to declare it a farce but the fact of the matter is that the poor and middle classes believe that Modi boldly waged war against the black money hoarders.

These classes faced most difficulties post demonetisation but the election results show that they acceded to Modi's appeal to support him in his 'war against black money'.

Modi's another revolutionary step was to grant banking access to the poor and downtrodden through Pradhan Mantri Jan Dhan Yojna (PMJDY). The 'elite' critics and political pundits didn't take it seriously when it was launched. But, they didn't realise that a bank account was the ‘most prized possession’ for crores of poor Indians. After three years, the average deposit per PMJDY account has more than doubled from Rs. 1,064 in March 2015 to Rs. 2,235 in March 2017. This data shows that the PMJDY was a masterstroke of Modi.

All erstwhile prime ministers would connect with the masses via media, especially state run Doordarshan. But, Modi chose All India Radio to connect with Indians a.ka. real voters via his Mann ki Baat.

The Prime Minister himself is most tech-savvy politician with 3.1 Million followers on Twitter.

Here is another example that the Opposition will have to deal with a Prime Minister who thinks out of the box. Before Modi became Prime Minister, Mahatma Gandhi was being portrayed as political icon of the Congress party. But, Modi broke that perception by launching a nationwide Swacch Bharat Mission in the name of Gandhi. The PM is leaving no stone unturned to spread the cleanliness mantra of the Mahatma. Actually, Modi is doing what the Congress missed.

Modi is a workaholic and as a result he inspires his ministers to become his alter-egos. Till now, he has managed to give a ‘scam free government’.

With a clear cut mandate of the majority Indians, Modi has marketed India very well at the international level. India has alienated Pakistan globally. Modi understands the mood of countrymen and acts accordingly.

Breaking the normal procedure, the Modi government publicly announced that Indian Army conducted surgical strike on the terrorist camps in Pakistan Occupied Kashmir (PoK) in September 2016 to avenge the killing of 19 soldiers in Uri, Jammu and Kashmir.

The Indian Army also on Tuesday released a video which shows Pakistani posts along the Nowshera sector in Rajouri being hit. This was a retaliatory step after Pakistan’s Border Action Team (BAT) mutilated bodies of two Indian soldiers in Krisha Ghati in Jammu and Kashmir on May 2.

The effects of the surgical strikes on ground could be debated, but Modi has given a sense of confidence to the Indians that there is a strong government in Delhi.

It is a fact that perception is jugular vein of politics and for the time being Modi has an edge over his political rivals as far as the perception is concerned.

It would be interesting to see that whether Sonia and other opposition leaders will be able to stop Modi hurricane or not. They, however, will be facing a herculean task to regain the lost trust of the voters.