Pranab Mukherjee to be awarded Bharat Ratna on August 8 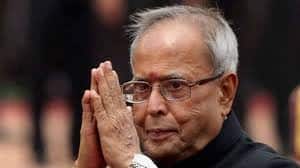 Mukherjee, India's 13th President, was selected for Bharat Ratna - India's highest civilian award - in January of 2019. The announcement had been made in a statement issued by the Rashtrapati Bhavan which also said the award would be given posthumously to social activist Nanaji Deshmukh and noted Assamese singer Bhupen Hazarika.

Prime Minister Narendra Modi had already congratulated Mukherjee for his decades of service to the country. "Pranab Da is an outstanding statesman of our times. He has served the nation selflessly and tirelessly for decades, leaving a strong imprint on the nation’s growth trajectory. His wisdom and intellect have few parallels. Delighted that he has been conferred the Bharat Ratna," he had tweeted.

Mukherjee had also been congratulated by Rahul Gandhi, who was still the Congress President in January. "Congratulations to Pranab Da on being awarded the Bharat Ratna! The Congress Party takes great pride in the fact that the immense contribution to public service & nation-building of one of our own,  has been recognised & honoured," he had tweeted.

Pakistan violates ceasefire along LoC in Jammu and Kashmir's Poonch