From Ahmedabad, the US President and the First Lady will make a brief stop at the Agra where they will visit the Taj Mahal, before arriving at the national capital for the main leg of the 36-hour long trip. 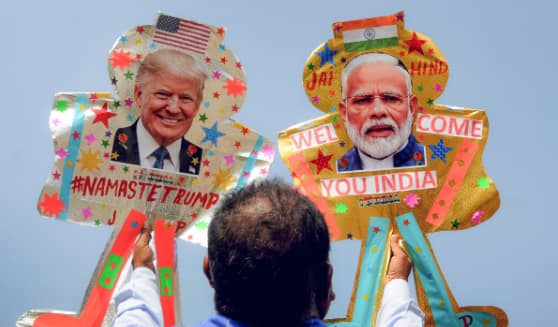 President Trump, who will become the seventh American President to visit India, took to Twitter on Sunday, and said, "Look so forward to being with my great friends in INDIA!" while quoting a morphed video showing him as the protagonist of hit Bollywood film `Bahubali`.

Prime Minister Narendra Modi said that it is an honour that "he will be with us tomorrow, starting with the historic programme in Ahmedabad!"

Trump will reach Ahmedabad around Monday noon and after a visit to Sabarmati Gandhi Ashram will address a mammoth crowd of more than 100,000 people at an event titled `Namaste Trump` at the Motera Stadium in the city.

The event will be based on the lines of `Howdy Modi` function that was addressed by the US President and Prime Minister Modi in Houston in September, last year.

From Ahmedabad, the US President and the First Lady will make a brief stop at the Agra where they will visit the Taj Mahal, before arriving at the national capital for the main leg of the 36-hour long trip.

Security has been tightened across Ahmedabad ahead of Trump`s visit. "A lot of people are expected to line the roads to welcome President Donald Trump. Security has been tightened not only in the stadium but also along the entire route from where the convoy of President Trump and Narendra Modi is scheduled to pass," said Crime Branch Special Commissioner of Police Ajay Tomar.

On February 25, the US President will first receive a ceremonial welcome at the Rashtrapati Bhawan as per protocol. From there, he will go to Rajghat to pay homage at the samadhi of Mahatma Gandhi. This will be followed by both, restricted, and delegation-level talks between Trump and Modi at the Hyderabad House in the national capital.

The participants at the bilateral meetings will be Adam S Boehler, the chief executive of the US International Development Finance Corporation, Federal Communications Commission Chairman Ajit Pai, Lisa Curtis, the senior director for South and Central Asia at the National Security Council, and Kash Patel, a former top National Security Council official.

After official meetings, Trump and his wife will have a lavish lunch hosted by Prime Minister Modi. From there, the US President will reach the ITC Maurya Hotel where External Affairs Minister S Jaishankar and Vice President of India Venkaiah Naidu are expected to call on him.

Trump will leave for the United States by his special flight on the night of February 25.

TRADE TALKS Among the key elements of the visit would be the trade talks between the United States and India. While answering a question on India-US Trade deal during the weekly press briefing on Thursday, External Affairs Ministry spokesperson Raveesh Kumar had said that New Delhi has been engaging with Washington for quite some time, and hopes to reach an understanding with an outcome that strikes the right balance for both sides.