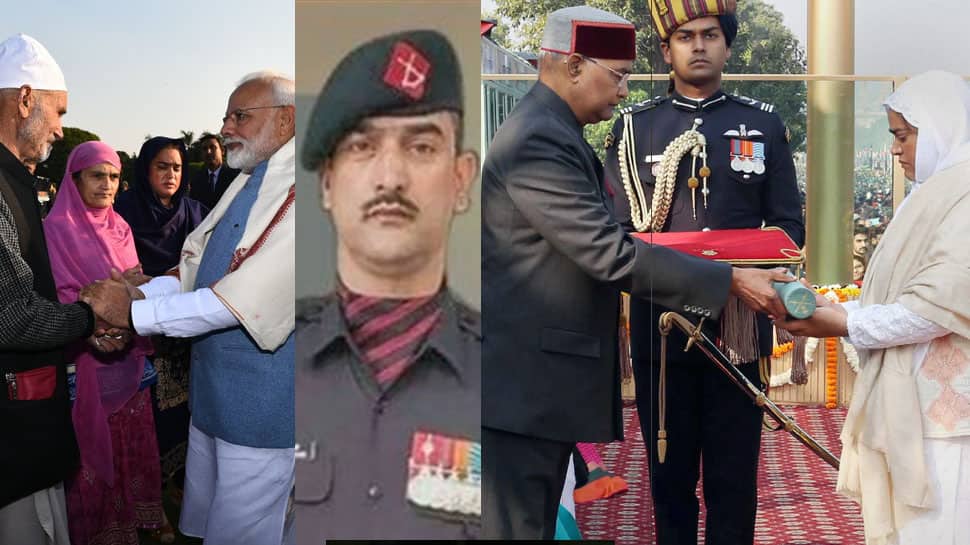 President Ram Nath Kovind and Defence Minister Nirmala Sitharaman too had met the family. Wani was a terrorist-turned-soldier who laid down his life fighting a group of terrorists in Jammu and Kashmir's Shopian district in November 2018.

#WATCH: At President Ram Nath Kovind's "At Home" function, Defence Minister Nirmala Sitharaman meets the family of Lance Naik #NazirAhmadWani, who lost his life while killing 6 terrorists in an operation in Kashmir, and was awarded the Ashok Chakra today. pic.twitter.com/O7KOeSelzJ

Wani, who has been posthumously awarded the Ashoka Chakra, will also be honoured by his colleagues and officers at Jammu and Kashmir Light Infantry Headquarters at Rangreth in Budgam.

Wani, the first Kashmiri to receive the honour, has been chosen for displaying exceptional courage when his unit engaged heavily-armed terrorists on November 25, 2018, in Hirapur village near Batgund in Kashmir.

"We have also decided to honour Wani as he was one of the Kashmiri youths who gives us the message that we have to move forward for the country together with such courage. It is a proud moment for us," CO of 162 Infantry Battalion Territorial Army Rajiv Ranjan Singh told news agency ANI.

Hailing from Cheki Ashmuji area of Kulgam district in Kashmir, Wani was once a terrorist but he gave up the terrorism and joined the Territorial Army in 2004 and was later a part of the Rashtriya Rifles. Apart from his wife, he is survived by two sons Athar (20) and Shaid (18).

On a fateful day, under the intense hail of bullets from the terrorists, he eliminated the district commander of the Lashkar-e-Taiba (LeT) outfit and one foreign terrorist in a very daring display of raw courage.

In the gunfight, he was hit multiple times, including in his head but he carried on and injured another terrorist before succumbing to his grievous injuries.

Wani was a hero right from the beginning and always served for the peace in his home state of Jammu and Kashmir, said an Army official. His extraordinarily fearless and courageous personage was reflected in getting the Sena Medal for gallantry twice in 2007 and 2018. The 2018 Sena Medal was given to him for eliminating a terrorist from a very close distance.