Let us take India to newer heights with enthusiasm: President Kovind in address to nation on eve of Independence Day

"Independence Day is an emotional day for all children of Mother India - in the country and elsewhere. We remember the struggles and sacrifices of freedom fighters." 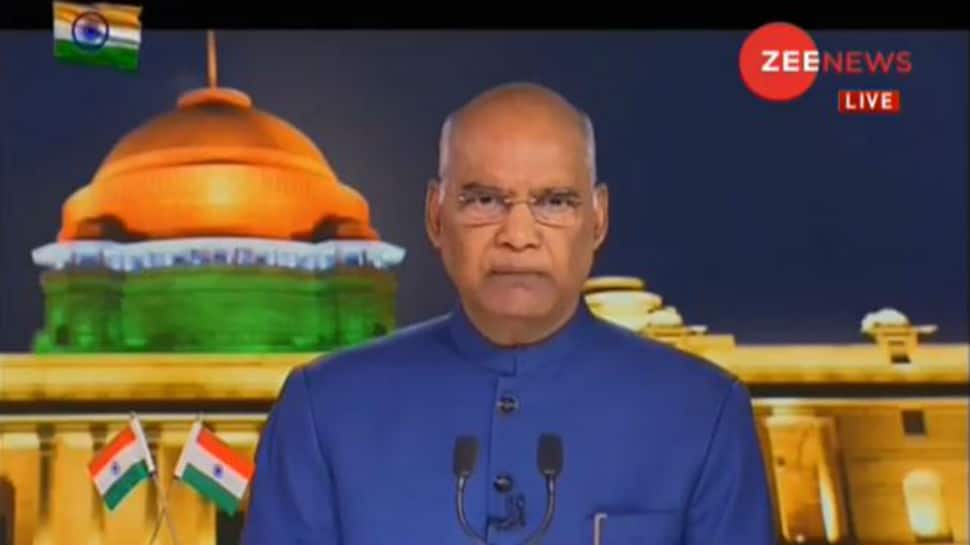 New Delhi: President Ram Nath Kovind is addressing the nation on the eve of India's 73rd Independence Day celebrations. With a message of peace, harmony and goodwill, he has reminded fellow countrymen of continuing on the path of nation-building.

Highlighting the significance that August 15 has in the lives of all Indians - in the country and elsewhere, President Kovind said that there is no greater joy than seeing the national flag being hoisted around the world. Calling it a symbol of national pride, he said that it serves to remind the massive sacrifices made and the valour shown by the country's freedom fighters. "The illustrious generation that led us to freedom did not perceive independence only in terms of transfer of political power. They considered it a stepping stone in a longer and larger process of nation-building and national welding," he said.

President Kovind also remembered the contribution of Mahatma Gandhi and said he had spoken of many challenges that the country and the world faces in contemporary times.

I am confident that the recent changes made in Jammu-Kashmir and Ladakh would be of immense benefit to those regions pic.twitter.com/Flo4HsM0P8

President Kovind then paid tribute to Guru Nanak Dev. "This year also marks the 550th birth anniversary of one of the greatest, wisest and most influential Indians of all time - Guru Nanak Dev ji. He was the founder of Sikhism but the reverence and respect he commands go far beyond just our Sikh brothers and sisters."

Thanking people for coming out in large numbers to vote in Lok Sabha election 2019, President Kovind said hailed the democratic principles of India. "Earlier this summer, the people of India participated in the 17th general election, the largest democratic exercise in human history. For this, I must congratulate our voters," he said. "Happy to note that the recently concluded session of Parliament saw lengthy and productive sittings of both the Lok Sabha and the Rajya Sabha. Nation-building is about creating that optimal partnership between voters and their representatives, between citizens and their government, and between civil society and state," he added.

Highlighting how the country is on the fast track of welfare as well as development, President Kovind urged fellow countrymen to be aware and to work hard to lead quality lives. "It is my understanding that 130 crore Indians, with their skills and potential, can create more opportunities for development," he said. He also appreciated the massive strides taken in space exploration but reminded all to hold true to the cultural and traditional values.

A special mention was also made of security forces and cops around the country with President Kovind saluting their valour and devotion to duty.

Massive preparations have been made across the country for Independence Day celebrations. Security in New Delhi has been especially tightened. The Red Fort here has multi-layered security as Prime Minister Narendra Modi will address the nation from here on Thursday. Delhi Police, NSG commandos, snipers and SWAT teams have been deputed to ensure there is no compromise with the security. Delhi Traffic Police has also issued an advisory for locals.