Along with the picture Congress leader Priyanka Gandhi also posted poem 'Invictus' by William Ernest Henley: "In the fell clutch of circumstance I have not winced nor cried aloud..." 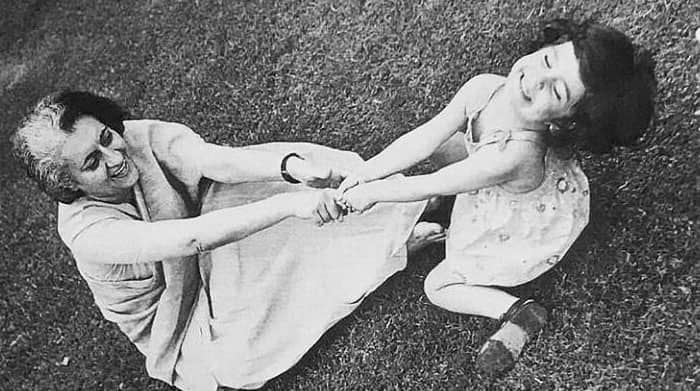 New Delhi: Congress leader Priyanka Gandhi Vadra on Tuesday paid rich tributes to her grandmother and India's first and only woman Prime Minister Indira Gandhi on her birth anniversary with a throwback picture of the two.

"In memory of the bravest woman I have known," she posted on her Twitter handle @priyankagandhi. The accompanying black-and-white picture showed her having fun with her grandmother while playing.

She also posted poem 'Invictus' by William Ernest Henley: "In the fell clutch of circumstance I have not winced nor cried aloud..."

The tweet garnered 3,000 likes and 376 retweets, with many users paying their tributes to the assassinated leader.

Replying to @priyankagandhi, a user quoted lines from a poem by Rabindranath Tagore: "Where the mind is without fear, and the head is held high..."

Another user remarked: "Two of the bravest women in a pic."

One user wrote: "You are lucky nurtured by one of the best leaders of the world Indra (sic). She was real Bharat Mata."

A user, however, reminded the Congress General Secretary of the Emergency. He wrote: "Do read about #emergency."