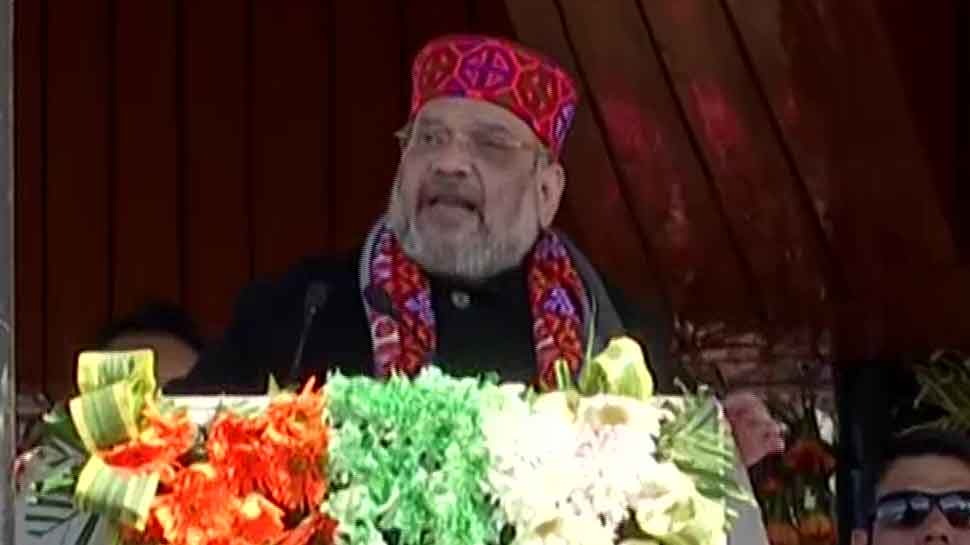 Shimla: Union Home Minister Amit Shah on Friday slammed the Congress party for instilling fears in the minds of the minority community members and reassured that no one would be stripped of their citizenship. The Home Minister, while addressing a public rally in Himachal Pradesh capital Shimla, accused the Congress party of spreading rumours about the Citizenship Amendment Act, 2019 and the National Register of Citizens (NRC).

Addressing the rally on the second anniversary of the BJP government led by Chief Minister Jai Ram Thakur, Shah in his half-hour address strongly defended the Citizenship Amendment Act (CAA).

"No one will be stripped of their citizenship," he told the gathering. "The Congress and company are spreading rumours that the citizenship of the minorities will be taken away with the Citizenship Amendment Act," the Home Minister said.

Training his guns at Congress MP Rahul Gandhi, Shah said, "I challenge Rahul 'baba' to show even one clause in the Act that has a provision to take away the citizenship of anyone."

The remarks from the Home Minister came at a time when anti-CAA protests continued in New Delhi's Jama Masjid. Shah further said that under this Act there was no provision to take away the citizenship of anyone, even belonging to a minority community.

"This Act has a provision to give citizenship to the those belonging to the minority who came from Bangladesh, Pakistan and Afghanistan," Shah said.

He said the Narendra Modi government in the Centre has approved One Rank, One Pension that gave relief to so many retired military personnel. Trying to build bonding, Shah, who donned a Himachali cap, said Prime Minister Narendra Modi shared a special attachment with the state.

"When Modiji became the Prime Minister for the first time, he granted special status to Himachal Pradesh with 90 per cent assistance in centrally-sponsored schemes," Shah said.