At least ten security personnel, including a brigade commander and a lieutenant colonel and a DIG of J&K police, sustained bullet injuries in the encounter, which took place in Pinglan area. 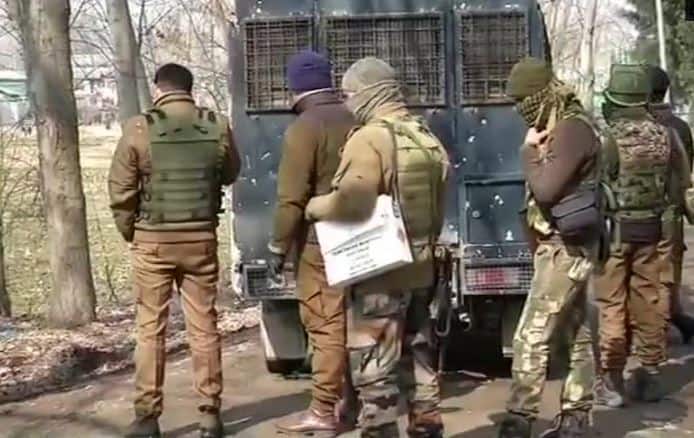 SRINAGAR: Three Jaish terrorists, including a Pakistani commander of the group involved in the attack on CRPF personnel, and an Army major were among eight people killed in a 18-hour encounter in Jammu and Kashmir's Pulwama district on Monday.

At least ten security personnel, including a brigade commander and a lieutenant colonel and a DIG of Jammu and Kashmir police, sustained bullet injuries in the encounter, which took place in Pulwama's Pinglan area.

The encounter started on Sunday night just 12 km from where a Jaish-e-Mohammed's suicide bomber rammed his explosives-laden car into a CRPF bus on Febraury 14, claiming the lives of killing 40 CRPF personnel.

Army officials told PTI that two of the slain terrorists were identified as Kamran, a Pakistani national and top commander of the Jaish, and Hilal Ahmad, a Kashmiri who was associated with JeM. The officials were trying to ascertain the identity of the third slained terrorist.

"Kamran's role in the February 14 suicide bombing of a CRPF convoy was under the scanner of investigators," a senior police official told PTI.

A mssive cordon and search operation was launched by security forces in the area during the night after they received credible inputs that some terrorists were hiding in Pinglan area.

As soon as security forces approached near the house where the terrorists had taken shelter, they started firing on the security forces, leading to a gun battle.

Pak-based Jaish-e-Mohammed has claimed responsibility for the Pulwama terror attack in which a Kashmiri terrorist trained by JeM had attacked a CRPF which was part of convoy of 78 vehicles on its way from Jammu to Srinagar.

Meanwhile, the Army paid glowing tributes to the soldiers who attained martyrdom on Monday at a solemn ceremony at Badami Bagh Cantonment, headquarters of the 15 Corps. Corps Commander Lt Gen K J S Dhillon led others in paying homage to the four soldiers including Major V S Dhoundiyal, who laid down their lives in the line of their duty.

A defence spokesperson said that representatives from other security agencies also joined in paying their last respects to the soldiers.