Presently Metro services are run in Kolkata on only one North-South corridor from Noapara to Kavi Subhas stations over a length of 27.3 Km. This corridor was inaugurated 36 years ago in 1984. 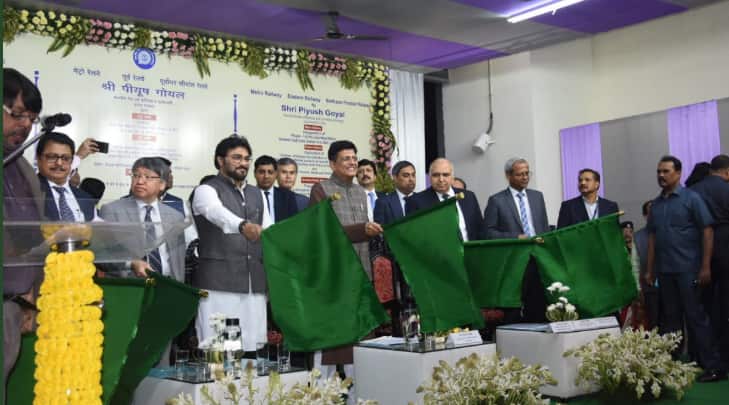 Presently Metro services are run in Kolkata on only one North-South corridor from Noapara to Kavi Subhas stations over a length of 27.3 Km. This corridor was inaugurated 36 years ago in 1984.

The inaugural train zoomed off from Sector V station to traverse a 4.88-km distance to Salt Lake Stadium, as Goyal said that the entire 16.5-km stretch of the corridor - till Howrah Maidan - is likely to be completed in two years.

The Railway Minister said, "The first underground station -- Phool Bagh -- will be ready before Durga Puja. If we get better coordination and local support, we will try to complete the corridor sooner up to Howrah."

He, however, added, "there are a few obstacles that are slowing the work on the other four lines. At some places, we need to have better coordination with the state government. I hope we will get the support and we will soon make Kolkata Metro a preferred mode of transport."

Obliquely blaming the Trinamool Congress government for delay in completion of work on the East-West Metro corridor, Goyal said, "Though work on the project started in 2009, it was stalled from 2012 to 2015 on the pretext of route realignment."

"The delay also caused cost escalation," Goyal said, adding that Rs 6,500 crore have so far been spent for the East-West Metro project.

The TMC leadership boycotted Thursday's inauguration after Chief Minister Mamata Banerjee's name was found missing from the invitation card for the programme.

The Metro project, scheduled to be completed by June 2021, had faced an unprecedented jolt last year, when a tunnel-boring machine hit an aquifer in the Bowbazar area of the city, causing severe ground subsidence and damage to several buildings. The accident further delayed the completion of work by another year, with the authorities now eyeing a 2022 deadline.

The five ongoing Metro railway projects in the city have been allotted a budgetary grant of Rs 1,542 crore for fiscal 2020-21. The East-West Metro corridor has received a grant of Rs 905 crore -- the highest among the five projects currently underway in Kolkata.

On the occasion, Goyal also dedicated to the nation 3 MW rooftop solar power plant at Howrah station which has been installed without incurring any capital expenditure by Railways. It will supply electricity @ Rs 3.62 per unit for 25 years as against the present rate of Rs 8.50 per unit. The total cumulative revenue saving will be Rs 40 crores (approx.) over the next 25 years.

It is India’s first-ever transportation project where trains will ply under the river, Hooghly. This project will be immensely helpful in easing the traffic congestion of Kolkata – a 300 years old city and also in reducing vehicular pollution. Phase-I of East-West Metro is a 5.3 kms long stretch having 6 elevated stations.

1. The first-ever transportation tunnel under any river in India.
2. Platform Screen Doors to prevent accidents or intentional fall.
3. Communication-Based Train Control System (CBTC) having enhanced safety features like anti-collision and automatic train control mechanism.
4. Passenger friendly features like lifts, escalators, the concept of barrier-free movement, designated parking for differently-abled, State of the art absorptive type noise barriers provided near hospitals/schools to reduce the train generated noise for comfort of the public.
5. The estimated budget for Phase- I is Rs 2431 crore out of the total project cost of Rs 8574.98 Cr.
6. Emergency Announcement and Fire Detection Mechanism in all coaches.