Union Defence Minister Rajnath Singh on Friday visited the forward posts at Bum La Pass near Tawang along Indo-China border in Arunachal Pradesh and reviewed the security situation along the Line of Actual Control (LAC). 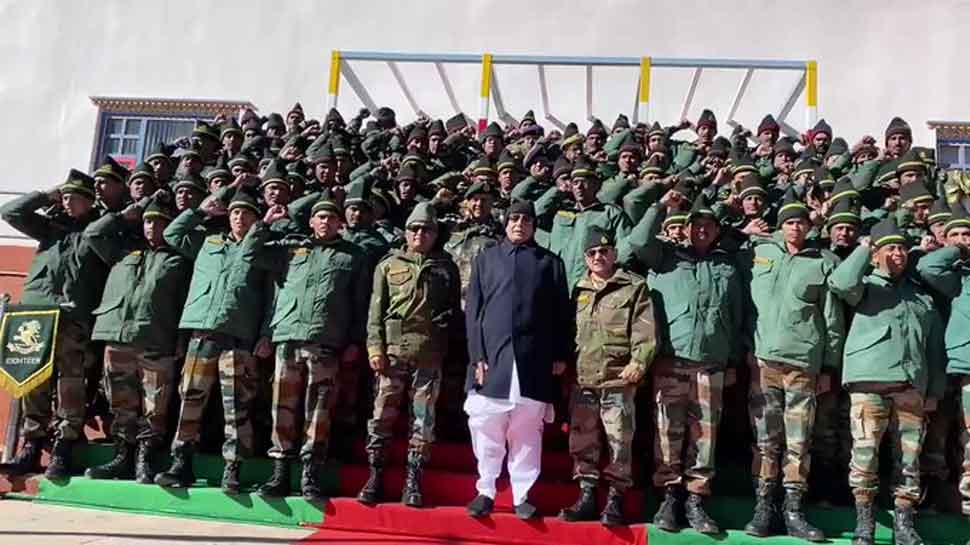 "Visited the forward areas in Bumla near Tawang, Arunachal Pradesh. Also, had a wonderful interaction with the brave jawans and officers of the Indian Army. The Army is securing India’s frontiers even in the most challenging environment," Rajnath Singh posted on Twitter.

"I got an opportunity to meet and interact with the soldiers posted here who told me that there is no prevailing tension here along Line of Actual Control," Rajnath Singh added.

The Defence Minister, also interacted with Army jawans posted along the LAC commended the Army for serving the nation at the border post with maturity. He also joined the jawans in chanting 'Bharat Mata Ki Jai' with much gusto and enthusiasm, the heartwarming video of which he posted on Twitter.

Singh also lauded the Indian Army and the Chinese Army for being "sensible enough to reduce the tensions on LAC."

"During my Bumla visit I have come to know that despite perceptional differences on the boundary issue both the Indian Army and the PLA have been sensible enough to reduce tensions on LAC," the Defence Minister tweeted.

During my Bumla visit I have come to know that despite perceptional differences on the boundary issue both the Indian Army and the PLA have been sensible enough to reduce tensions on LAC.

I congratulate the Indian Army for showing great maturity in all situations.

Earlier on Thursday, the Defence Minister attended ‘Maitree Diwas’ in Tawang in Arunachal Pradesh. “This festival symbolises the patriotism of the people of the region and their close relationship with the Armed Forces. The civil-military friendship is an assurance that the nation’s borders are doubly safe. He called for oneness among people, civil administration, Police and Central Armed Police Forces to realise the dream of New India,” Singh said.

The two-day socio-military cultural extravaganza is jointly organised by the Indian Army, Tawang civil administration and volunteers at the high-altitude stadium, which stands as a testimony to the spirit of solidarity and patriotic fervour that runs deep amongst the locals of Tawang district.

Singh also stressed on government’s planning of setting up of North East Industrial Corridor which will facilitate numerous job opportunities for the people of the region.

“Arunachal Corridor will act as a land bridge between India and South East Asia that will provide employment opportunities and promote tourism. India is marching forward on the path of all-round progress under the leadership of Prime Minister Shri Narendra Modi,” Singh said this during his address at the 11th Maitree Diwas Celebrations.