Rajnath Singh says no country safe from terrorism, calls for collective international action against it

The Defence Minister called for a collective international action to check perpetrators of terrorism and advocated strong measures against those who support and finance terrorism and provide sanctuary to terrorists. Singh is on a three-day official visit to South Korea in the second leg of a two-nation tour which also involved Japan. 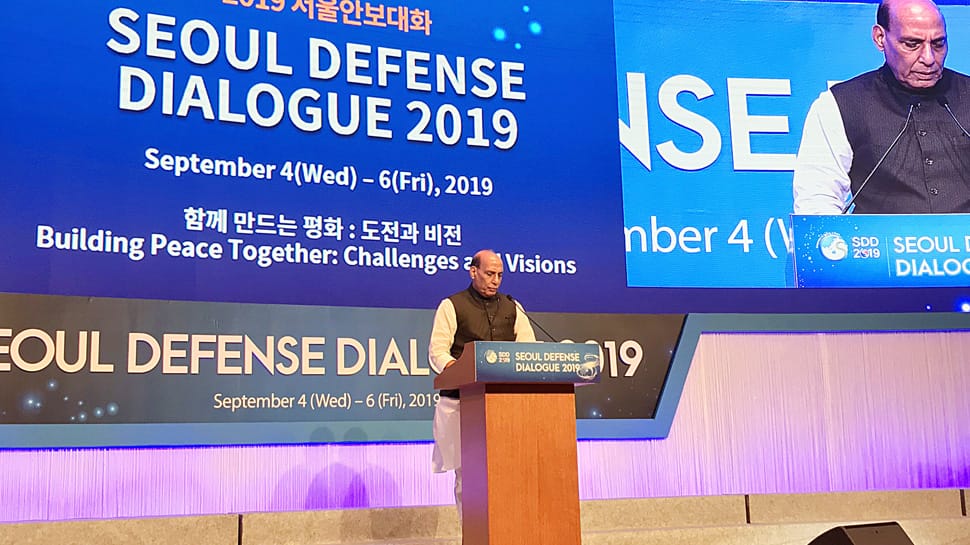 Union Defence Minister Rajnath Singh has said that no country in the world is safe from terrorism and India has been actively pursuing counter terrorism cooperation bilaterally, regionally and globally through UN and other fora. The Defence Minister called for a collective international action to check perpetrators of terrorism and advocated strong measures against those who support and finance terrorism and provide sanctuary to terrorists. Singh is on a three-day official visit to South Korea in the second leg of a two-nation tour which also involved Japan.

Delivering a keynote address at the ‘Seoul Defence Dialogue 2019’ with the theme, ‘Building Peace Together: Challenges and Vision’, during his visit to Korea, he said on Thursday, “of the numerous security challenges that the world is facing, the gravest is that of terrorism”. Singh said, world politics today is in a state of flux and this has aggravated global and regional challenges to international peace and security. He added that new and emerging technologies have impacted the regional as well as global security environment.

“Our region is confronted with numerous traditional and non-traditional security threats such as terrorism, conflicts, transnational crimes, maritime threats, proliferation as well as the challenges of sustainable development, including the lack of energy, low intra-regional trade and lack of connectivity”, he said.

The Defence Minister emphasised that good relations with neighbours – both immediate and extended – are a priority for India’s foreign policy as part of its Neighbourhood First Policy. “A key feature of India’s Neighbourhood First Policy is also its engagement with its neighbours in sub-regional groupings of Indian Ocean Rim Association (IORA) and Bay of Bengal Initiative for Multi-Sectoral Technical and Economic Cooperation (BIMSTEC), apart from a trilateral maritime co-operation format with Sri Lanka and Maldives to improve Maritime Domain Awareness and co-operation”, he added.

He also expressed India’s support for peace and stability in the Korean Peninsula and its denuclearisation through dialogue and diplomacy. “Our quest for common prosperity and security requires us to evolve a common rules-based order for our region, the Indo-Pacific region. This order must be based on sovereignty and territorial integrity and equality of all nations, irrespective of size and strength. These rules and norms must be based on the consent of all," he said.

The Defence Minister said, India has strengthened co-operative engagements in the Indo-Pacific region on the basis of the principle of “SAGAR – Security and Growth for All in the Region”, a principle that remains the cornerstone of India’s outlook for the Indo-Pacific region. He advocated for an open and inclusive architecture for the Indo-Pacific region with Association of Southeast Asian Nations (ASEAN) centrality, equal access to the global commons, freedom of navigation in the seas and in the air and unimpeded commerce, the importance of connectivity, a rules-based order and dialogue as the means to resolve disputes.

He also said Asia can make 21st century as a century of peace and holistic development, where the nations can tackle the common challenges of poverty, disease, illiteracy and terrorism. He stressed the five principles of Indian thought –Samman (respect), Samvad (dialogue), Sahayog (cooperation), Shanti (peace) and Samriddhi (prosperity) - to achieve this goal.

Singh said India and Korea play a stellar role in bringing about peace, progress, prosperity, riding on twin pillars of economic and security partnership. He said, bilateral co-operation can be instrumental in--Ensuring rules-based order in the region; Fighting terrorism, piracy, proliferation and transnational crimes; Collaboration on issues such as HADR, Cyber Security and other maritime-related threats; Seek to align and coordinate regional maritime capacity building/security assistance efforts. He termed as ‘spectacular’ the progress made by Korea over the past few decades saying that it has been a source of inspiration for India. He added that the synergy between India’s ‘Act East Policy’ and Korea’s ‘New Southern Policy’ has further strengthened the Special Strategic Partnership between the two countries.

It may be noted that India has been among the first responders in Humanitarian Aid and Disaster Relief (HADR) situations in the region, from Fiji to Yemen. Recently, the Indian Navy conducted HADR operations in the aftermath of Cyclone IDAI that hit Mozambique in March 2019.

Mother Dairy hikes cow milk prices to Rs 44 a litre, Rs 23 for half litre in Delhi-NCR