The minister further said that from time immemorial pilgrimages have been one of the most powerful motivator for travel. 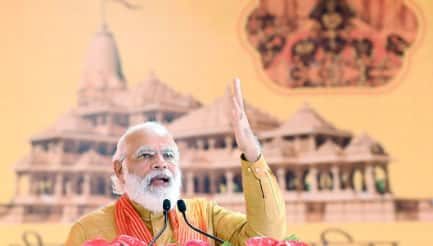 New Delhi: As Prime Minister Narendra Modi on Wednesday (August 5) performed Bhoomi Pujan for the Ram temple in Ayodhya, Union Minister for Culture and Tourism Prahlad Singh Patel said that the temple will boost the religious/spiritual tourism. The minister further said that from time immemorial pilgrimages have been one of the most powerful motivator for travel.

"Ayodhya, the birthplace of Lord Ram, is a great place to take a plunge into the pool of spirituality. The city is dotted with temples and is one of the most venerable cities of ancient India. Ancient beliefs say, the gods themselves created this city," Patel said, adding "This is a great moment of faith and spirituality."

According to Patel, Religious/Spiritual tourism has proven resilient to the pressure of the global recession because it is not seen as a luxury but rather travel with a purpose, and because of its nature the pilgrimage travel is elastic and strong even in any economic scenario.

"Therefore, the Ministry of Tourism sees hope in helping millions of followers of all great world religions that are deeply rooted in India," he added.

Patel also said that the Ministry of Tourism under its SwadeshDarshan Scheme- Integrated Development of Theme Based Tourist Circuits is developing tourism infrastructure in the circuits, across the country, having tourist potential in a planned and prioritized manner. Under this Scheme, Ministry of Tourism has sanctioned a project, ‘Development of Ayodhya’ under Ramayana circuit theme for an amount of Rs 127.20 crore in the year 2017-18.

The minister added that the various components sanctioned under this project include development of Ram katha gallery and park, Ram ki paidi, development of Guptarghat and Laxman qila ghat, rejuvenation of Ayodhya street, multipurpose hall at Digambarakhada etc.

"Other components included in this project are solar lighting, solid waste management, drainage components, police booth, signages at various locations, stone benches, gazebo, drinking water kiosks, cctv, bus depot and parking, tourist sheds, landscaping of public spaces and beautification of tulsi das garden etc. Almost 80% of the project is completed on ground as on date," he said through a statement.

The ministry has sanctioned another project, “Development of Chitrakoot and Shringverpur” under Ramayana circuit theme of Swadesh Darshan in the year 2016-17, this project has been sanctioned for an amount of Rs 69.45 crore. The projects comprising various components like development of Sandhya Ghat, Tourist facilitation centre, development of Ram Shain, veerasan and Sita kund, solar lighting, parking signages etc. at Shringverpur.

DNA: How can India become fit in the era of COVID-19?

DNA: Who is the real role model of New India?

DNA: Are you just a ‘product’ for social media?