The focus during Jaishankar's visit to China is on the second informal summit between Prime Minister Narendra Modi and Chinese President Xi Jinping later this year. 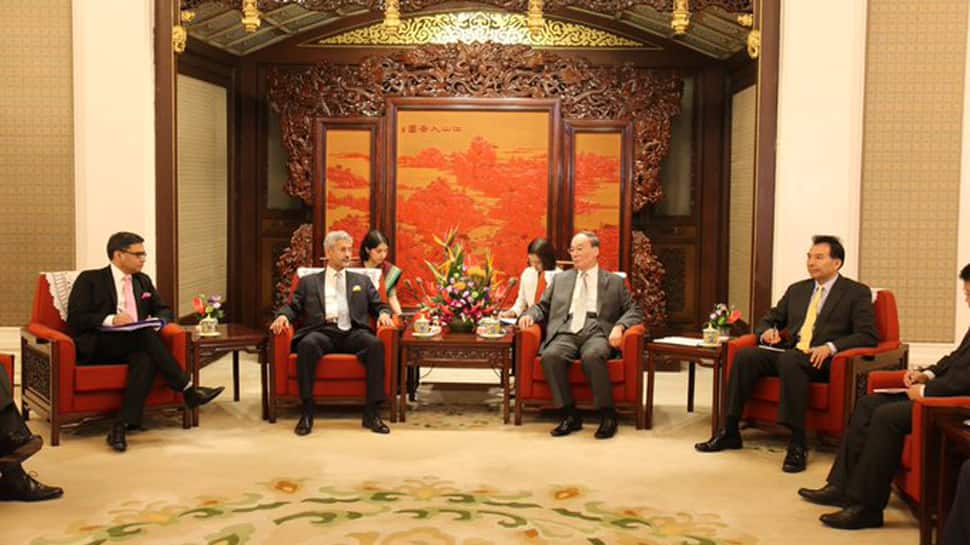 External Affairs Minister S Jaishankar has met Chinese foreign minister Wang Yi in Bejing. The meeting took place at Diaoyutai guest house, which was once the residence of Chairman Mao Zedong, but is now used to receive foreign dignitaries.

Jaishankar, who is on a pre-scheduled visit to Beijing from August 11-13, had left for China on Sunday. The focus during the visit is on the second informal summit between Prime Minister Narendra Modi and Chinese President Xi Jinping later this year.

Post lunch, both the foreign ministers are slated to inaugurate the India-China Media forum and make press statements as well.

External Affairs Minister will co-chair the second meeting of the India-China High-Level Mechanism on Cultural and People-to-People Exchanges (HLM) along with his counterpart. The HLM aims to increase people-to-people ties and enhance engagement in areas such as tourism, art, films, media, culture, sports.

"The 2nd HLM meeting will provide an opportunity to follow up on the outcomes of the 1st HLM meeting and discuss new initiatives for enhancing people-to-people exchanges between our two countries", said the Ministry of External Affairs in a statement.

Prior to the meeting, the External Affairs Minister called on Vice President of China, Wang Qishan.

Ahead of the visit, India had referred to China as an important partner. Raveesh Kumar, spokesperson of the Ministry of External Affairs, had said, "China is a very important partner. There are many channels available to us to discuss all bilateral issues."

"It is expected bilateral issues will come up for discussion. We will discuss the informal summit. We will also discuss how to celebrate the 70th anniversary of the establishment of diplomatic ties."

Prime Minister Modi had met the Chinese President in Kyrgyzstan earlier this year on the sidelines of Shanghai cooperation summit and last year both met each other 4 times starting with the famous informal summit in Wuhan in April.

The visit of Indian foreign minister comes even as Pakistani foreign minister SM Qureshi went on an emergency visit to China to meet the Chinese FM in the backdrop of India's internal decision to change the special status for the erstwhile state of Jammu and Kashmir.

Pakistani FM met Chinese FM on Friday and in a release, the Chinese foreign ministry said, "Pakistan and India are both China’s friendly neighbours and major developing countries that are in a crucial stage of development", and called on the "two sides to proceed from their national development and peace in South Asia"

BJP wouldn't have touched Article 370 if Jammu and Kashmir was Hindu majority: Chidambaram