Earlier in 2018, the apex court had allowed girls and women of all age groups to visit the Lord Ayyappa temple at Sabarimala in Kerala, following which a batch of review petitions was filed. 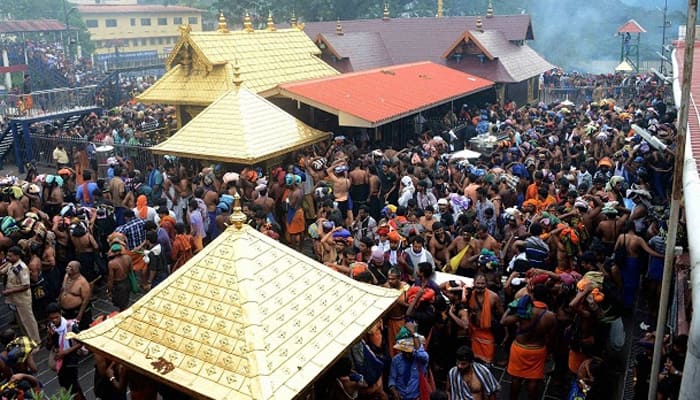 New Delhi: A nine-judge Constitution bench of the Supreme Court on Monday (January 13) will hear the batch of petitions seeking review of the 2018 judgement in Sabarimala temple case. The apex court, which had earlier allowed girls and women of all age groups to visit the shrine, on January 6 issued a notice to inform about the listing.

The notice said, "Take notice that the following matters will be listed for hearing before a Nine Judges Constitution Bench commencing from Monday the 13th January 2020."

On November 14, 2019, a five-judge bench in a 3:2 majority verdict had referred to a seven-judge bench the pleas seeking review of the 2018 judgement. The top court clubbed the restrictions faced by Muslim women in connection with the entry into mosques and dargahs and Parsi women, married to non-Parsi men, being discriminated from entering the Fire Temple.

The majority verdict noted that it is essential to evolve a judicial policy to do "substantial and complete justice". The court, in the majority judgement, had observed that the issues surrounding the constitutional validity of religious practices, which discriminate against women specifically in connection with their entry into a place of worship, were not limited to the Sabarimala temple case.

On December 13, 2019, the top court had said that its 2018 order on Sabarimala temple issue was "not final" as the matter is pending before a seven-judge bench, which, it had said, will be constituted soon. A three-judge bench headed by Chief Justice of India SA Bobde had made these observations while passing an order on a plea filed by two activists -- Bindu Ammini and Fathima A S -- seeking safe passage for women inside the shrine.

Earlier in 2018, the apex court had allowed girls and women of all age groups to visit the Lord Ayyappa temple at Sabarimala in Kerala, following which a batch of review petitions was filed. Allowing their review petitions, the top court had last month referred the matter to a larger bench.