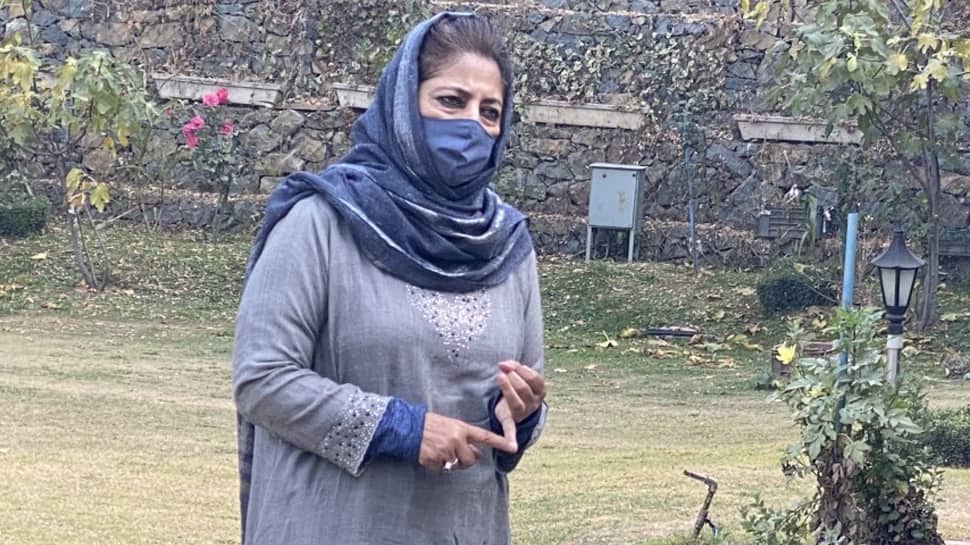 The Centre has paved the way for people from outside Jammu and Kashmir to buy land in the union territory by amending several laws, over a year after the nullification of Articles 370 and 35A of the Constitution. In a gazette notification, the Centre on October 27 omitted the phrase "permanent resident of the state" from Section 17 of the Jammu and Kashmir Development Act that deals with disposal of the land in the union territory.

Addressing the media, Mufti said, "Our people in Jammu and Srinagar were trying to take out protest against land laws but they were detained. I tried to go out I was also stopped. Nobody is allowed to talk here. These people want to take our resources. These people are communal."

She added, "They aren’t able to give employment to poor and instead are giving false assurances to people of the country that they can buy land here. Like they have taken land from farmers that is how they want to take our lands in J&K and give it to corporates. We can’t sit silently on everything."

Training her guns at the Centre over the bitter standoff with China, Mufti challenged the government. "If the government is so powerful go take away the land back from China which it has grabbed in Ladakh. They aren’t able to take it back from them but will take our land."

Taking a jibe at Prime Minister Narendra Modi, she said, "We had thought Modi ji has been given such a big mandate he will do bigger things but it seems they haven’t come out of election mode."

Before the repeal of Article 370 and Article 35-A in August last year, non-residents could not buy any immovable property in Jammu and Kashmir. However, the fresh changes have paved the way for non-residents to buy land in the union territory.

Former Advocate General Mohammad Ishaq Qadri had said the amendments have opened floodgates for people from outside Jammu and Kashmir to buy lands. "Now there is no legal bar on purchase of land here by outsiders," he had said.

National Conference leader Omar Abdullah had said the amendments were "unacceptable". "Unacceptable amendments to the land ownership laws of J&K. Even the tokenism of domicile has been done away with when purchasing non-agricultural land & transfer of agricultural land has been made easier. J&K is now up for sale & the poorer small land holding owners will suffer," Omar had tweeted.

5. The provisions of this Order which adapt or modify any law so as to alter the manner in which, the authority by which or the law under or in accordance with which, any powers are exercisable, shall not render invalid any notification, order, commitment, attachment, bye-law, rule or regulation duly made or issued, or anything duly done before the 31st day of October, 2019; and any such notification, order commitment, attachment, bye-law, rule, regulation or anything may be revoked, varied or undone in the like manner, to the like extent and in the like circumstances as if it had been made, issued or done after the commencement of this Order by the competent authority and in accordance with the provisions then applicable to such case.

6. The repeal or amendment of any law specified in the Schedule to this Order shall not affect—  (a) the previous operation of any law so repealed or anything duly done or suffered thereunder;  (b) any right, privilege, obligation or liability acquired, accrued or incurred under any law so repealed;  (c) any penalty, forfeiture or punishment incurred in respect of any offence committed against any law so repealed; or (d) any investigation, legal proceeding or remedy in respect of any such right, privilege, obligation, liability, penalty, forfeiture or punishment as aforesaid, and any such investigation, legal proceeding or remedy may be instituted, continued or enforced, and any such penalty, forfeiture or punishment may be imposed, as if the Jammu and Kashmir Reorganisation Act, 2019 or this Order had not been passed or issued.