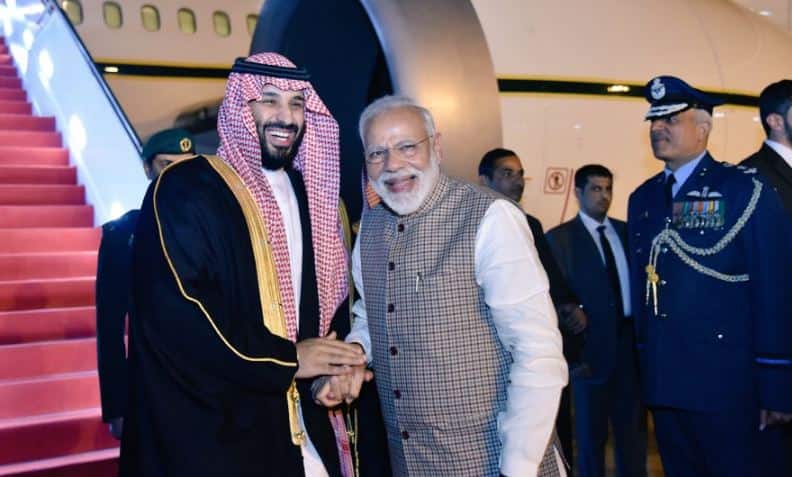 NEW DELHI: Saudi Arabia's Crown Prince Mohammed bin Salman on Tuesday arrived in New Delhi for a one-day visit. Prime Minister Narendra Modi was present at the airport to receive the Saudi Crown Prince and the Prime Minister welcomed his guest with a tight hug.

Amid the all-out efforts being made by Modi government to diplomatically isolate Pakistan for its involvement in ghastly terror attack on CRPR personnel in Pulwama, the Crown Prince had praised the efforts made by Pakistan for ensuring peace and stability in the region. He has also announced investments worth USD 20 billion for Pakistan.

The Crown Prince arrived in New Delhi after concluding his two-day tour of Pakistan. During his Pakistan, the Crown Prince said dialogue was the only way to resolve "outstanding issues" between India and Pakistan.

The Crown Prince is scheduled to hold talks with PM Modi on Wednesday and official sources said during his meeting with the Crown Prince, Prime Minister Modi would hold talks over ways to enhance defence ties between the two nations, PTI reported.

The MEA said in a statement that the Crown Prince will leave New Delhi around 11:50 PM on Wednesday and it is expected that he will leave for China from India.

The visit of Crown Prince is of huge significance as it comes in the backdrop of the heightened tension between India and Pakistan following the terror attack on CRPF personnel in Pulwama by a suicide bomber owing allegiance to Pakistan-based terror group Jaish-e-Mohammad.