Calling the partition a Nehruvian blunder, Singh asserted that if the step was not taken then the history of the Indian subcontinent would have been different. Speaking on the topic, he said, "I think if students have curiosity in their mind then it's just their enthusiasm." 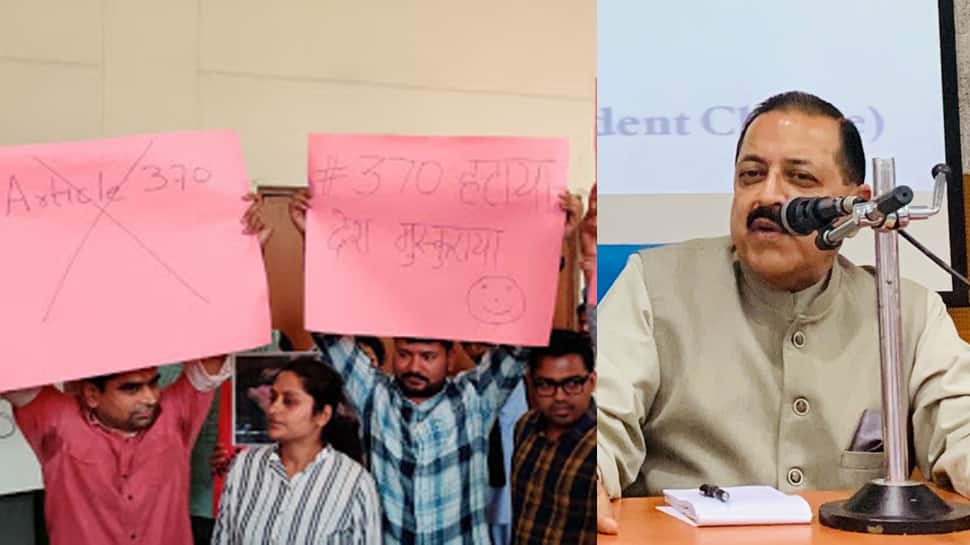 A scuffle broke out between the members of All India Students Association (AISA) and the Akhil Bharatiya Vidyarthi Parishad (ABVP) on Thursday in Jawaharlal Nehru University (JNU) during a seminar by Union Minister Jitendra Singh on abrogation of Article 370 in Jammu and Kashmir.

Singh, delivering a lecture on 'Abrogation of Article 370: Peace, Stability and Development in Jammu, Kashmir & Ladakh', called the partition of India the outcome of personal ambitions of Jawaharlal Nehru and Muhammad Ali Jinnah, adding that the common man was not in favour of the decision.

#WATCH: Scuffle broke out between two groups of students during a seminar on #Article370 at Jawaharlal Nehru University campus in Delhi, today. Union Minister Jitendra Singh was speaking at the seminar. pic.twitter.com/KOLU18Cyo7

Calling the partition a Nehruvian blunder, Singh asserted that if the step was not taken then the history of the Indian subcontinent would have been different. Speaking on the topic, he said, "I think if students have curiosity in their mind then it's just their enthusiasm."

Following the scuffle ABVP JNU member, Saurabh Sharma, said, "We want to have a discussion on benefits of abrogation of Article 370 but few elements are here in JNU that doesn`t want it to happen."

The ABVP also said, "As the talk was about to start communist and BAPSA prevalent in the campus raised slogans against India and slogans that were pro-Pakistan in nature. These groups tried to enter the premises of the venue where the talk was taking place to disrupt the same. It was a critical security situation for the Minister himself to move out of the venue post the talk."

"ABVP-JNU severely condemns this attitude of the communist and BAPSA organizations in the JNU campus for continued shaming of the University through such incidents and indecent behaviour," they added.

The government on August 5 abrogated Article 370 which accorded special status to Jammu and Kashmir. It also hived the state in two Union Territories -- Jammu and Kashmir, and Ladakh -- which will come into being on October 31.