In a strongly-worded article in its mouthpiece ''Saamana'', the Maharashtra-based party said that Congress is an ''exhausted party'' now. 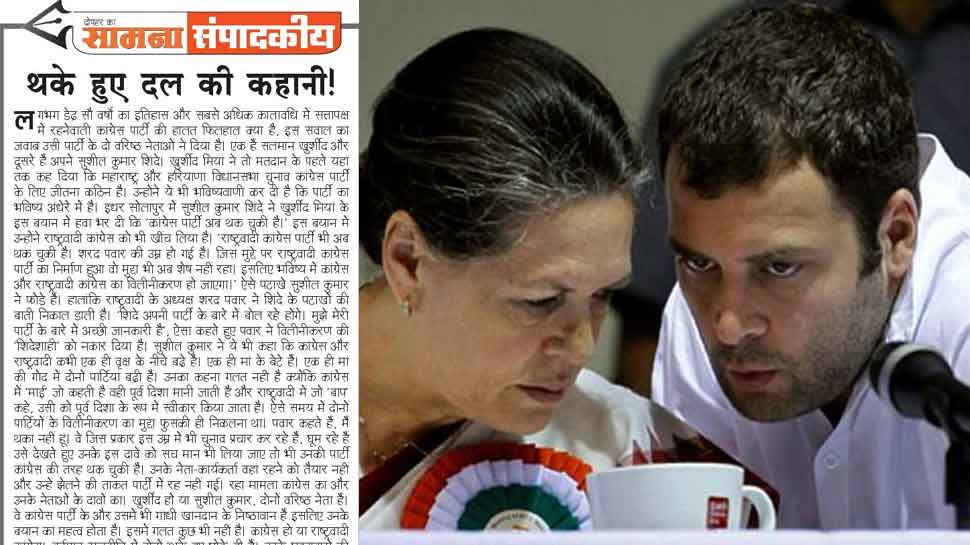 MUMBAI: A day after senior Congress leaders Salman Khurshid and Jyotiraditya Scindia admitted that their party is in a big crisis, Uddhav Thackeray-led Shiv Sena had mocked the grand old party by calling it an ''exhausted party.''

In a strongly-worded article in its mouthpiece ''Saamana'', the Maharashtra-based party said that Congress is an ''exhausted party'' now.

The Sena article cited Salman Khurshid and Sushil Kumar Shinde's recent remarks on the current crisis in Congress party to back its claim.

Lashing out at Congress, the Sena article said that the oldest party is full of more ageing leaders today and needed young and dynamic leaders to revive its fortune.

The Sena article did not even spare Sharad Pawar's Nationalist Congress Party (NCP) and said that like its founder, the NCP too has become old.

It predicted that the NCP had deviated from its sole objective behind its existence and will be merged with Congress party soon.

The two parties have been constantly failing since 2014 elections and their top leadership has failed to steer them out of the crisis, it said.

Attacking Congress further, the Saamana article said that while it has lost its relevance in today's times, the only four states where it is in power, rein is in the old hands.

The hard-hitting Sena article came a day after senior Congress leaders Salman Khurshid and Jyotiraditya Scindia expressed concerns over the current situation and future of their party.

Khurshid had on Wednesday said that former Congress president Rahul Gandhi "walked away" after party`s Lok Sabha polls defeat. Jyotiraditya Scindia too commented that his party needs to self-introspect as to why it is going downwards.

However, the two were advised not to vent their anger in the open and instead discuss all issued at various party forums.

Leader of the Congress in Lok Sabha Adhir Ranjan Chowdhury urged Khurshid not to vent his anger in the open and discuss all issues at various party forums.

"When the party has been going into election mood in states, these kinds of comments or utterances shouldn`t work well for the party. Instead of uttering outside, Khurshid should have consulted and expressed himself inside the party," Adhir Ranjan Chowdhury, Leader of the Congress in Lok Sabha, urged Khurshid.

Chowdhury added that he cannot subscribe to the views expressed by Khurshid.

"On many occasions, Rahul Gandhi had categorically stated that he felt that it was moral accountability of the Congress President to own up the defeat of the Congress. Accordingly, he thought it prudent to relinquish the chair of Congress president," Chowdhury said.

The Congress leader said that Gandhi had set a rarest of rare examples in the present political scenario by resigning from his post.