Shivakumara Swami, a saga of service to society

He was considered as the incarnation of Basavanna, the 12th century social reformer, as he accepted all irrespective of their religion or castes. 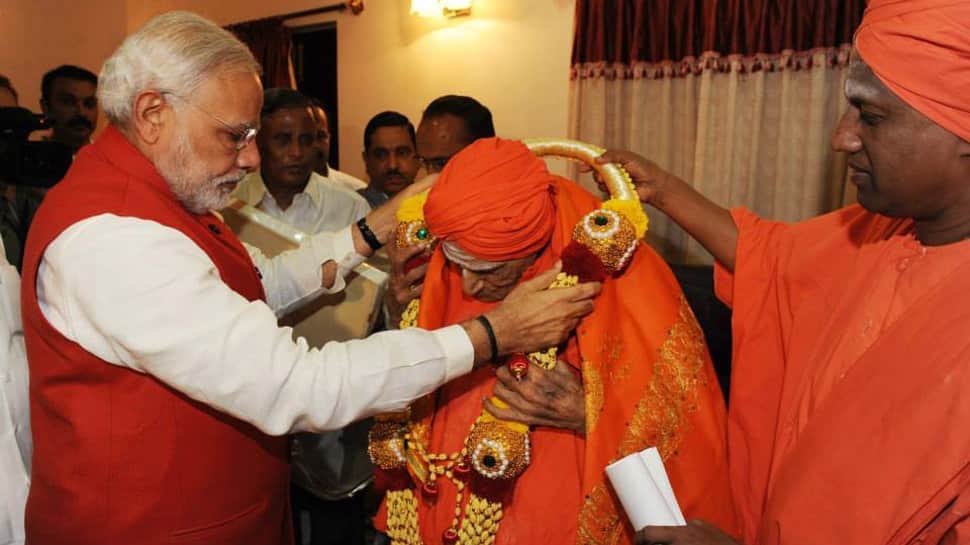 Bengaluru: The "Walking God" as he is reverentially called, the 111-year old Sree Shivakumara Swami of Siddaganga mutt has left an indelible imprint with his stellar contributions in education sector and philanthropy targeted at children in whom he saw the Almighty.

Known as "trivida dasohi" for his triple sacraments - food, shelter and education - among his followers, the swamiji, who died on Monday, is considered as the incarnation of Basavanna, the 12th century social reformer, as he accepted all irrespective of their religion or castes.

Born on April 1, 1907 at Veerapura in Magadi Taluk near here to Honnappa and Gangamma as Shivanna, he was among the 12 siblings. Losing his mother at the age of 8 is said to be one of the reasons for transformation in Shivanna's behaviour, that turned spiritual.

After completing primary education at his native village and Nagavalli, the Swamiji completed his matriculation in Tumkuru, before coming here for Bachelor of Arts degree with physics and Mathematics as optional Subjects.

Shivakumara Swami took over as the "peethadipati" (pontiff) of Siddaganga mutt succeeding his Guru Sree Sree Uddana Shivayogigalu Shivakumara Swami and reigned over the seminary for about 76 years.

During the seven decades, he founded Sri Siddaganga Education Society under which thousands of students, mostly from villages and under privileged sections, are being educated in both traditional and modern learning. Proficient in Kannada, English and Sanskrit, he was known for strict discipline.

A noted religious figure and humanitarian, Shivakumara swami performed "trikala Linga pooja" according to Virakta tradition of Veerasaivism until recently, even during his hospitalisation. He even taught English and Sanskrit atthe Mutt's institutions and his students are scattered across the world in high positions.

The Swamji's staff have often cited his organised lifestyle, scientific diet plan, graceful humility and blissful simplicity in life, along with hard work as the secret of his long life. He was also strongly devoted to the cause of farmers and agriculture by organising cattle and agri fairs.

He has been awarded with the honorary "Doctor of Letters" Degree by the Karnataka University, Dharwad.

It is said that during his graduation, Shivanna had gone to Siddaganga mutt to perform the last rites of Marularadhya, who would have been the next head of the mutt, when the then senior pontiff Uddana Shivayogigalu announced him as his successor.

He was formally initiated into the holy order as a successor in March 1930, thus joining the lineage of sages that is said to have its traditions dating back to 1300 A.D.

The Swamiji who has several laurels and awards to his name was bestowed with the prestigious "Karnataka Ratna", the state's highest civilian award, and "Padma Bhushan".

There is now a clamour from people of different walks of life, including politicians, for conferring "Bharat Ratna" on him.

Mutt officials and his disciples believe Swamiji had "icha mrutyu" (ability to decide on his death), as he miraculously recovered from critical health conditions.

He had even undergone critical liver bypass last month, which is said to be very rare at this old age. Also,he had undergone certain procedures, including implant of stents in the common bile duct at the ripe age.

The highly revered swamiji of Lingayats, the majority community, had remained politically neutral.

At the height of controversy over granting religious minority status to Lingayats, which had become a politically sensitive issue during the May assembly polls last year, the senior pontiff had remained non-committal.

The swamiji had the magnetic pull to attract politicians of all hues, including chief ministers of the state and elsewhere. His 100th birthday celebrations were attended by the then President A P J Abdul Kalam in April, 2007.