The Supreme Court had on Wednesday allowed Yechury to visit Jammu and Kashmir to meet ailing party MLA Tarigami. 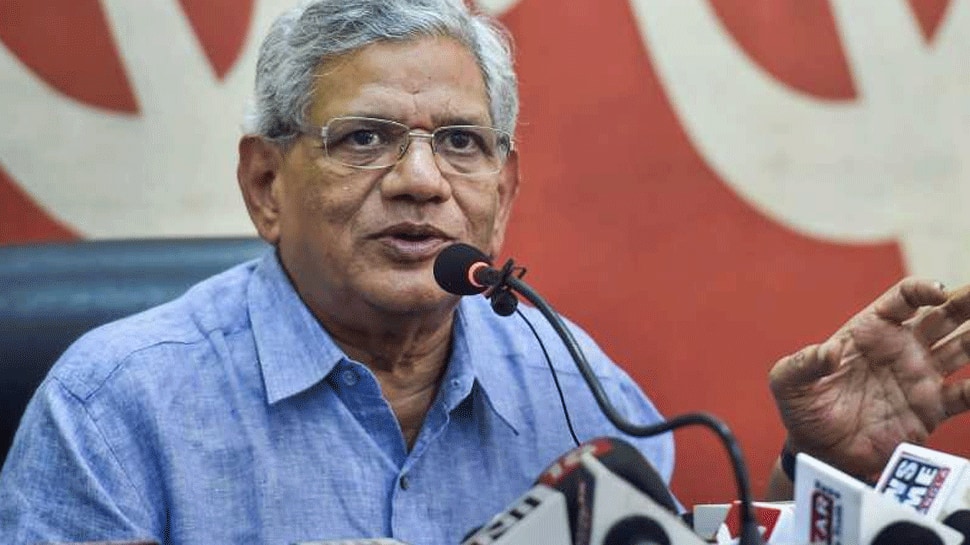 SRINAGAR: CPI-M general secretary Sitaram Yechury reached Kashmir Valley on Thursday to meet ailing party MLA Yousuf Tarigami. This is possibly the first visit to Kashmir by any opposition leader after the Centre's move to revoke Article 370 that gave special status to the state.

Soon after landing at the airport, Yechury was whisked away in a VIP entourage of more than seven cars to take him to Tarigami`s residence.Security agencies are unlikely to allow Yechury any political meeting or media interactions apart from meeting his party colleague as per the apex court`s order.

Before leaving for Srinagar, Yechury had said that Jammu and Kashmir Governor Satya Pal Malik's remark on Wednesday against Congress is not acceptable.

"The office of the Governor is not supposed to be used for such comments. In a democracy, everybody has a right to have their opinion. That`s their fundamental right and that is the right of their liberty. And if that is attacked in this manner by somebody who is occupying the office of a Governor, that is something which is not acceptable," Yechury was quoted as saying by news agency ANI at the Delhi Airport.

Meanwhile, mobile phone services, which were snapped across Jammu and Kashmir since August 5, resumed in five districts of Jammu region - Doda, Kishtwar, Ramban, Rajouri and Poonch.

While addressing media in Srinagar on Wednesday, Governor Malik had said, "The Congress party has not cleared its stand on Jammu and Kashmir so far. In the coming elections, its competitors need not say anything. They will just call Congress leaders the supporters of Article 370 and then people will beat them with shoes."

Malik also slammed former Congress chief Rahul Gandhi saying he behaved like a "political juvenile" over the abrogation of Article 370, which led Pakistan to use his comments at the UN.

Addressing reporters, Malik said, "I don`t want to speak for Rahul Gandhi as he comes from a respected family. But today, he behaved like a political juvenile. Pakistan in its letter to UN mentioned his comments. He should not have done that"

The Governor said that Gandhi should have spoken on Article 370 on the day when one of his party leaders speaking in the Lok Sabha mentioned United Nation with Kashmir. "If he was a leader, he should have scolded his party colleague and then told him the party's stand on Kashmir," he said.

The Supreme Court had on Wednesday allowed Yechury to visit Jammu and Kashmir and meet Tarigami. The top court, however, said that the Left leader's visit should only be to meet Tarigami as a friend and not for any political purpose.

On August 24, Yechury had filed a habeas corpus petition in the apex court for protection of Tarigami, who is allegedly under detention in Jammu and Kashmir since the Centre abrogated provisions of Article 370.

Tarigami is a member of the Central Committee of the CPI(M) and has served as a four-time MLA of the dissolved Jammu and Kashmir Assembly.

The writ petition was filed under Article 32 of the Constitution, according to a statement by the CPI(M).