Situation in Kashmir not normal, says Rahul Gandhi after being sent back from Srinagar airport

Speaking to reporters after landing at Delhi airport, the Gandhi scion said that the delegation wanted to get a sense of what people were undergoing, however, they were not allowed to move beyond the airport. He further alleged that media personnel who accompanied the delegation were "mishandled" and "beaten up". 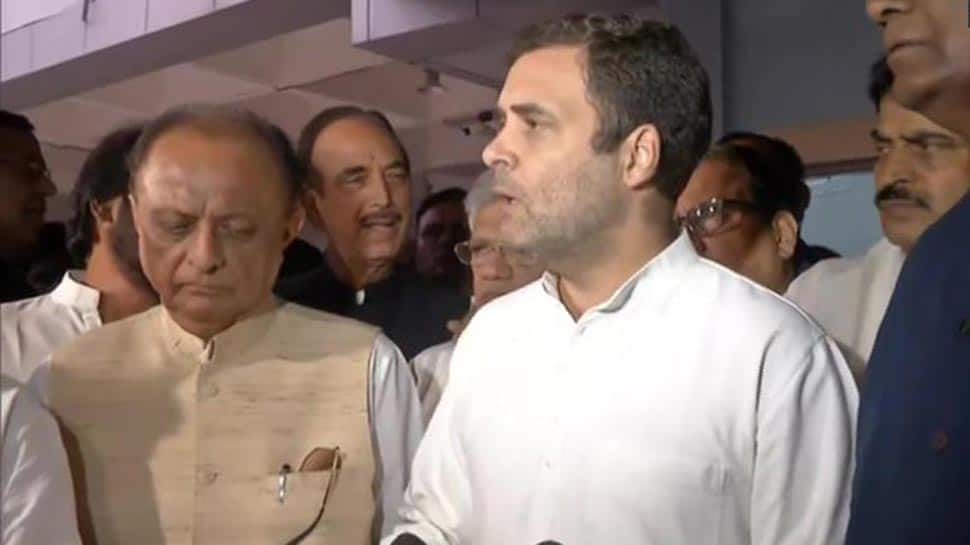 New Delhi: The situation in Jammu and Kashmir is "clearly not normal", claimed Congress leader Rahul Gandhi Saturday after a delegation of opposition leaders was denied permission to step out of the Srinagar airport and sent back to Delhi.

Speaking to reporters after landing at Delhi airport, the Gandhi scion said that the delegation, comprising 12 opposition leaders, wanted to get a sense of what people were undergoing, however, they were not allowed to move beyond the airport. He further alleged that media personnel who accompanied the delegation were "mishandled" and "beaten up".

"Some days ago I was invited by the governor to visit J&K. I accepted the invitation. We wanted to get a sense of what people are going through, but we weren't allowed beyond the airport. Press people with us were mishandled, beaten. It's clear that the situation in J&K isn't normal," news agency ANI quoted Gandhi as saying.

Was it not Governor Satya Pal Malik that invited Mr. Gandhi to come to J&K and assess the situation for himself? #RahulGandhiWithJnK pic.twitter.com/jneIkpOJve

The delegation of opposition leaders had gone to Srinagar to review the prevailing situation in Jammu and Kashmir after Governor Satya Pal Malik had "invited" Gandhi. Sharing a report where Malik was quoted as saying that he had invited Gandhi to the Valley, the Congress leader tweeted that he would accept the “gracious invitation” and would want to meet common people, political leaders and soldiers deployed.

Responding to Malik’s offer of sending an aircraft for the former Congress chief to visit Jammu and Kashmir and see the prevailing situation, Gandhi had said that instead of the aircraft, he would need “freedom” to travel and meet people.

Taking to Twitter, the Jammu And Kashmir Information and Public Relations Department had said on Friday that political leaders should "not visit Srinagar as they would be putting other people to inconvenience" at a "time when the government is trying to protect the people of Jammu and Kashmir from the threat of cross border terrorism and attacks..."

This comes after BJP-led central government revoked Article 370 and passed a bill in Parliament which bifurcated the state into two Union Territories. The Centre had imposed several restrictions in the Valley following the revocation in an effort to maintain peace and avoid any untoward incident.