The snake wrapped itself around a black metal-like object inside the photocopy machine. It was later rescued and handed over to the forest officials. 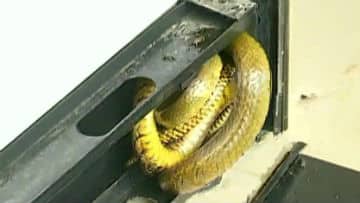 As seen in a picture, the snake wrapped itself around a black metal-like object inside the machine. It was later rescued and handed over to the forest officials.

Shivamogga: A rat snake was found inside a photocopy machine at Jayanagara police station, today. The snake was later rescued and handed over to forest officials. #Karnataka pic.twitter.com/udH9YqAwyb

Earlier this week, in a bizarre incident, a woman died after being bitten by two mating snakes after she unknowingly sat down on them while talking on the phone.

The incident took place in a village in Gorakhpur. The snakes had entered the house and were playing on the bed which had a printed bed cover. She walked into the room while talking and without seeing the snakes, she sat down on the bed. The snakes bit her and within a few minutes, she fell unconscious. She was soon rushed to the hospital where she died during treatment.

Furious over the woman's death, her family members beat the snakes to death as when they returned to the room, the snakes were still playing on the bed.

(With ANI and IANS inputs)