Stampede over shortage of onions at Rythu bazaar in Andhra Pradesh

Onion prices in many places have crossed Rs 100 per kg due to low production. Acknowledging the crisis, the Jagan Mohan Reddy-led government in Andhra has decided to subsidise onions until the prices stabilise. 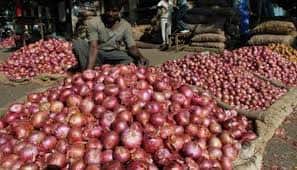 Vizianagaram: An old man holding a yellow-coloured bag was patiently waiting inside the Rythu bazaar, not anticipating what would happen next. Rumours were spread that there was a shortage of onions at the farmer markets. And soon, a large crowd of men and women who were getting restless behind the partially closed gates breached the gate, and barged into the Parthapuram Rythu Bazar in Vizianagaram district, knocking down the elderly man. A bystander promptly helped him, before he could suffer any injury in the stampede.

This incident took place on Thursday. The reason: people were anxious not to lose out on buying onions for their families at Rs 25 per kg instead of the market price of Rs 100 per kg. A video of the incident is being widely shared to highlight how the surge in onion prices has hit the citizens.

Onion prices in many places have crossed Rs 100 per kg due to low production. Acknowledging the crisis, the Jagan Mohan Reddy-led government in Andhra has decided to subsidise onions until the prices stabilise. To facilitate the needs of the people, the government bought 16,000 quintals of onions from Maharashtra for nearly Rs 10 crore.

As planned, the government is dispatching onions to Rythu Bazars – markets where people can buy directly from the farmers – for a cheaper rate. This exercise has been going on for the last 10 days, according to officials.

“Someone spread rumours that the stock was over, and the people broke open the gates,” said YV Syam Kumar, Assistant Director Marketing, Vizianagaram, to TNM. “Fortunately, nothing major happened,” he added.

The Assistant Director said that they have been dispatching 10 tonnes of onions every day across their seven Rythu Bazars. Anticipating these stampede-like incidents, police were deputed at the gates to control the crowd, he said.

Meanwhile, opposition parties raised the issue of the price-rise of onions in Parliament, for which Union Finance Minister Nirmala Sitharaman said that the government has taken several steps to check the rising prices of onion, including a ban on exports, imposition of stock limits, import and transfer of onion from surplus to deficit areas.