On the occasion of the birth anniversary of Prof. Satish Dhawan, a pioneer who spearheaded ISRO's efforts  as the organization’s second Chairman, an Indian space startup has unveiled their indigenously developed cryogenic engine - Dhawan-I. This cryogenic engine is meant to fuel the upper stage of their rocket Vikram -II. 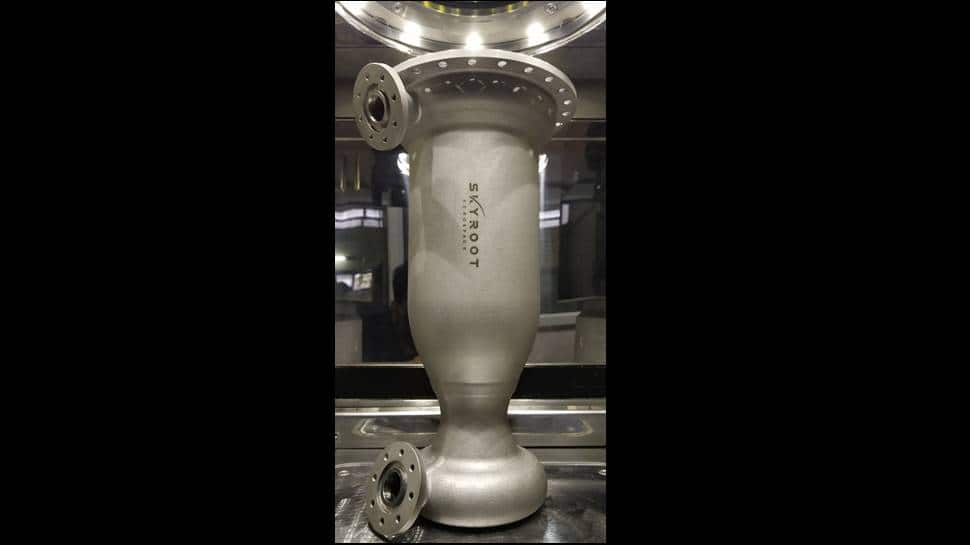 Chennai: On the occasion of the birth anniversary of Professor Satish Dhawan, a pioneer who spearheaded ISRO's efforts as the organization’s second Chairman, an Indian space startup has unveiled their indigenously developed cryogenic engine - Dhawan-I. This cryogenic engine is meant to fuel the upper stage of their rocket Vikram -II.

The company, Skyroot Aerospace has already tested a solid-fueled engine, but the cryogenic engine is even more significant because of the extreme complexity in the technology and the handling of its fuels. A cryogenic engine uses liquid fuel and an oxidizer that is maintained at extremely cold temperatures. Cryogenic is a generic term that can be used to describe temperatures below -150 degrees Celsius. Such engines are used in the upper most stages of rockets, which are used for propulsion in space.

A typical rocket consists of two or more stages, each of which would have its own engines (either single or packed in a cluster). Simply put, a rocket is a combination of multiple engines(stages) that are vertically stacked.

Skyroot Aerospace has revealed that their cryogenic engine would be powered by Liquid Natural gas as fuel (LNG) and Liquid Oxygen as oxidizer (LoX). “This engine is India’s first fully Cryogenic engine running on futuristic fuel LNG”, the agency said.

The Cryogenic propulsion team is led by V. Gnanagandhi an ex-ISRO scientist and Padmashri awardee who is also the Senior Vice President at Skyroot.

It is said that LNG being used comprises of over 90% methane gas, thus making it a clean-burning, low-cost, highly re-usable field which is suited for long duration space missions.

Pawan Kumar Chandana, CEO of Skyroot Aerospace says that their team has successfully completed many tests to check the fuel flow and structural integrity. He added that they were building a dedicated test facility for hot fire testing of this engine.

“Dhawan-I is a 100% 3D Printed cryogenic engine with regenerative cooling” says  Naga Bharath Daka, COO. Regenerative cooling refers to a configuration where, some or all of the propellant is passed through tubes, channels, or in a jacket around the combustion chamber or nozzle to cool the engine. This is effective because the fuel (and sometimes the oxidizer) are good coolants. The heated propellant is then fed into a special gas generator or injected directly into the main combustion chamber.

While the company has successfully tested the upper-most stage engine of its first rocket Vikram-I, the initial stage engines of Vikram-I are being manufactured. If all goes well, the company is looking forward to a maiden launch of Vikram-I by December 2021, with the support and guidance of the Indian Space Research Organization(ISRO). The cryogenic engine won’t see action in Vikram-I and is meant for their bigger rocket Vikram-II.