Meanwhile, the central government warned its employees of disciplinary action if they go on strike and do not join work. 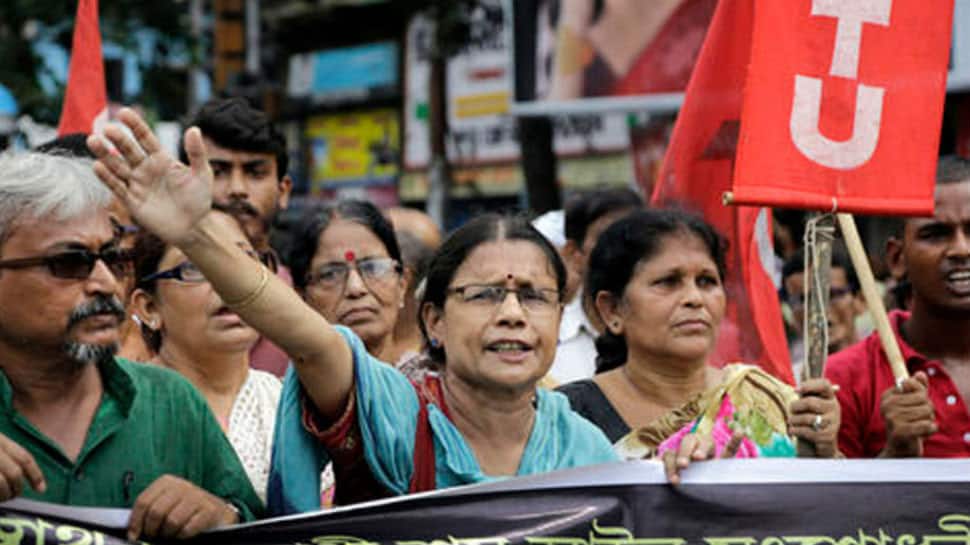 New Delhi: Stray incidents of violence in West Bengal, public bus services going off the road in Mumbai and partial impact on banking operations marred the first day of a two-day strike called by trade unions to protest against alleged anti-people policies of the central government.

Normal life was largely unaffected in most parts of the country barring Left-ruled Kerala where the stir turned into a 'hartal' with schools and colleges being shut and banking services being affected.

In Mumbai, over 32,000 employees of Mumbai's civic transport undertaking went on an indefinite strike to demand higher wages. The protest, which coincided with the two-day strike called by 10 trade unions, affected nearly 25 lakh daily commuters.

Meanwhile, the central government warned its employees of disciplinary action if they go on strike and do not join work.

Two leading bank unions joined the strike, partially affecting banking operations. However, State Bank of India (SBI) and private sector banks reported no impact on their operations as the other seven unions in the banking sector are not part of the strike.

Government services including electricity supply and train services were unaffected by the strike even though several trains were reported running late. Local trains, EMU and MEMU in West Bengal were delayed en route owing to the agitation.

Reports from Kerala said offices recorded low attendance but there was no untoward incident in the state. Karnataka evoked mixed response while other states saw business as usual.

Trains were stopped in Kerala while buses and autorickshaws were off the road, hitting normal life, according to reports from the state. Workers from various sectors have extended support to the two-day strike.

Over a dozen trains were delayed due to blockade of railway tracks by strike supporters, leaving a large number of passengers stranded at many places, reports said.

In West Bengal, where the Trinamool Congress-led state government had made elaborate security arrangements, reported an incident of stone pelting at a school bus and sporadic incidents of vandalism at a few places.

Government offices, IT sector, and port activities were normal, and so were attendance at tea gardens.

Strike supporters burnt effigies of Prime Minister Narendra Modi and burnt tyres on streets in some parts of the state including Kolkata. In Howrah, Siliguri, Bardhaman, Birbhum, North and South 24 Paraganas, clashes were reported between Trinamool Congress workers and strike supporters as TMC activists tried to stop them from forcibly imposing the strike.

As many as 22 policemen were injured in Rajasthan following clashes at the manufacturing plant of a Japanese company as workers, who were supporting the stir, tried to enter its premises, police said.

Union leaders claimed that 50 workers injured in the police action against protesters.

According to bank unions, thousands of bank employees participated in the strike, impacting counter activities such as cash deposit and withdrawal as well as cheque clearances were impacted at many branches. Officers at many branches were seen handling some of the activities.

Centre of Indian Trade Union (CITU) claimed around 20 crore workers from all sectors of the economy participated in the strike across the country. The strike would continue on January 9.

"The unprecedented expanse and active participation of the workers in the two-day strike is a clear indication of the extent of anger and resentment of the workers against the neo-liberal policies and the attacks on their working and living conditions perpetrated by the government's policies," CITU said in a statement.

It alleged that the strike was the result of the discontent over the BJP-led Narendra Modi government's policies which were for the benefit of big corporates and business houses, both foreign and domestic, "with least concern for the plight of the toiling people".

It claimed that the strike, which was supported by sectors like telecom, health, education, coal, steel, electricity, banking, insurance and transport, affected train movement as well as normal life across states like West Bengal, Kerala, several districts of Karnataka, North-Eastern states and Odisha.

The 10 trade union that gave the strike call include INTUC, AITUC, HMS, CITU, AIUTUC, TUCC, SEWA, AICCTU, LPF and UTUC. The RSS affiliate Bharatiya Mazdoor Sangh (BMS) is not participating in the strike.

"Road transport was seriously affected in most of the states, including Kerala, Karnataka, Maharashtra, Bihar, Haryana, Punjab, Uttarakhand. Though the railway employees did not join the strike, in several places they extended support," the CITU claimed.

"As many as five states of Assam, Kerala, Manipur, Meghalaya, Odisha, and the union territory of Puducherry witnessed complete bandh while other states like Karnataka, Delhi, Goa, West Bengal reported 100 per cent strike by workers today," Kaur told PTI.