With the swearing-in of the nine new judges, the strength of the Supreme Court has risen to 33, including the CJI, out of the sanctioned strength of 34. 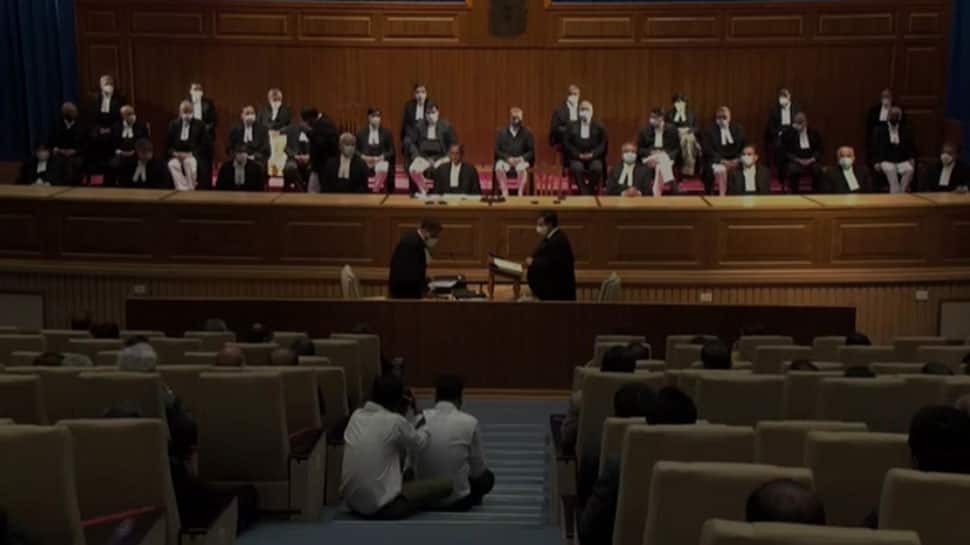 New Delhi: Nine new judges, including three women, were on Tuesday administered oath of office as judges of the Supreme Court, taking its strength to 33. It is for the first time in the history of the apex court that nine judges took the oath of office at one go.

Besides them, Justice C T Ravikumar, Justice M M Sundresh, Justice Bela M Trivedi and Justice P S Narasimha, who was a senior advocate and former Additional Solicitor General, were also administered oath of office by the CJI.
Justice Nagarathna, the daughter of former CJI E S Venkataramiah, is in line to become the first woman CJI in September 2027.

Three out of these nine new judges - Justices Nath, Nagarathna and Narasimha -- are also in line to become the CJI.

Traditionally, the oath of office to new judges is administered in the CJI's courtroom but the swearing-in ceremony was shifted to the auditorium keeping in view the need for strict adherence to COVID-19 norms, a press release issued by the apex court's public relations office on Monday had said.

Before the administration of the oath of office, the warrant of appointment issued by President Ram Nath Kovind was read during the swearing-in ceremony.

Justice Nath is in line to become the CJI upon the retirement of sitting apex court judge Justice Surya Kant in February 2027. Justice Nath would be succeeded by Justice Nagarathna, who would have a tenure of over a month as the head of the judiciary.

Justice Narasimha would succeed Justice Nagarathna as the CJI and would have a tenure of over six months. The apex court Collegium had on August 17 recommended these nine names for appointment as judges of the top court.

Later, the President had signed the warrants of their appointment as apex court judges. The top court, which came into being on January 26, 1950, has seen very few women judges since its inception and in the last over 71 years has appointed only eight lady judges starting from M Fathima Beevi in 1989.

Presently, Justice Indira Banerjee was the lone serving woman judge in the apex court after her elevation on August 7, 2018, from the Madras High Court where she was serving as the Chief Justice.

While high court judges retire at the age of 62, the retirement age of Supreme Court judges is 65. The recommendation of these nine names by the five-member collegium headed by CJI Ramana at its meeting on August 17 had put an end to the 21-month-long logjam over the appointment of new judges to the top court.

The impasse over the appointment had led to a situation in which not a single name for the judgeship in the apex court could be recommended after the superannuation of then CJI Ranjan Gogoi on November 17, 2019.