A five-judge bench will pronounce its verdict on the 100-year-old case tomorrow at 10:30 am.

New Delhi: The Supreme Court will pronounce its verdict in the most sensitive case of Ram Janmbhoomi-Babri Masjid land dispute in Ayodhya on Saturday. The apex court is likely to pronounce judgement at 10:30 am in the morning. A five-judge bench comprising Chief Justice Ranjan Gogoi, along with other justices SA Bobde, DY Chandrachud, Ashok Bhushan and Abdul Nazeer, will pronounce its verdict. The five-judges bench heard the arguments in the case for 40 days and reserved its verdict on October 16.

The apex court heard a batch of petitions challenging September 30, 2010, Allahabad High Court judgment trifurcating the 2.77 acres of the disputed land at Ayodhya into three equal parts among Ram Lalla, Sunni Waqf Board, and Nirmohi Akhara.

Earlier in the day, Chief Justice Ranjan Gogoi met Uttar Pradesh Chief Secretary Rajendra Kumar Tiwari and Director General of Police Om Prakash Singh to take of the situation on ground ahead of Supreme Court's verdict. The Chief Justice Gogoi, along with the officials, reviewed security arrangements in Ayodhya and asked if the state needs direction, the additional help of any kind from the Centre, other states or from the Supreme Court. 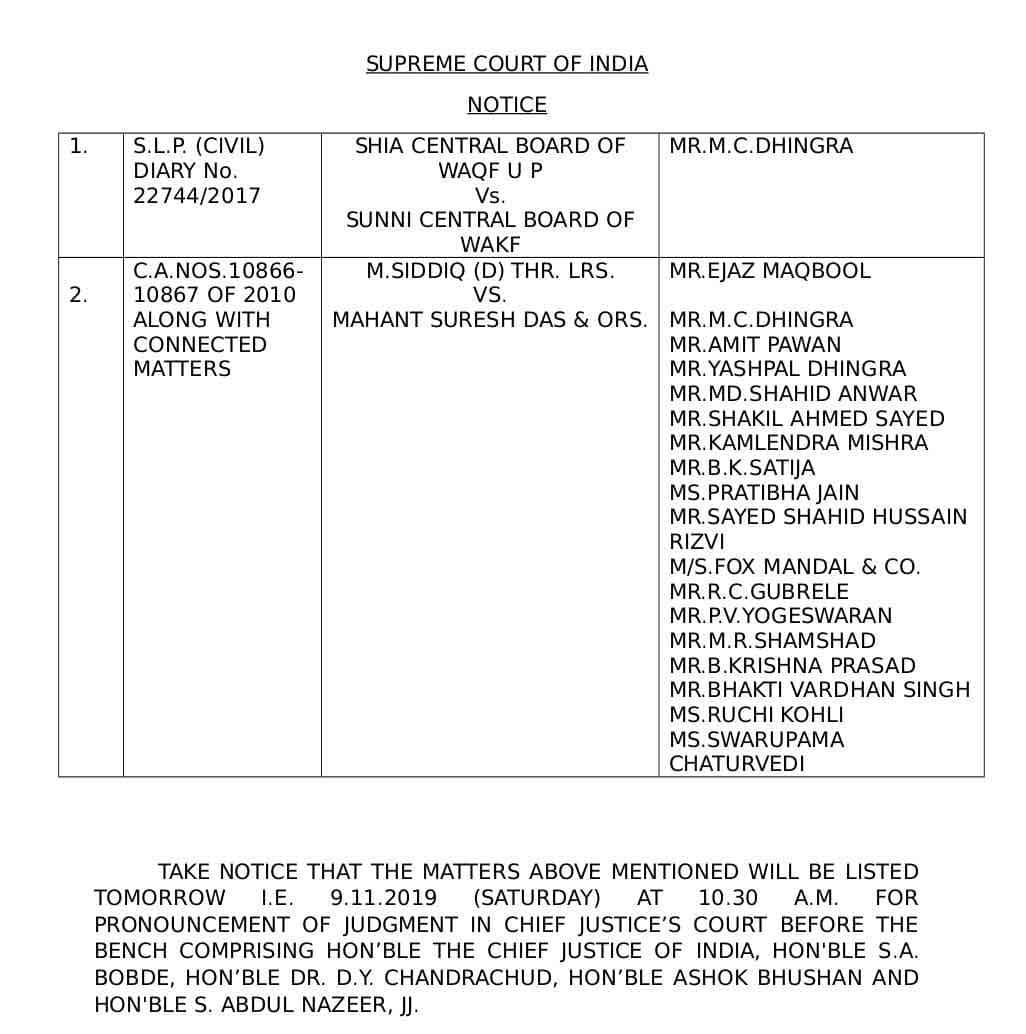 Ahead of the verdict, UP CM holds a high-level meeting with Chief Secretary and DGP of the state.  All the police stations in Ayodhya will remain on alert, and a flag march will be carried in the temple town to appeal to people for maintaining peace.

The UP goverment has issued order that "All schools, colleges, educational institutions and training centres to remain closed from 9th November to 11th November."

Meanwhile, the temple town has turned into a fortress ahead of the crucial judgement, with the Centre deploying more than 4000 paramilitary forces. The government is also stated to have deployed two helicopters as a standby as a part of the security arrangements.

The administration has also set up 20 jails temporary jails besides deploying rapid reaction force (RRF) on vigil at 78 places.

"Good evening everyone! Mumbai police is aware of the situation and we are keeping a close watch. Our preparations for tomorrow have begun. Adequate Bandobast is being deployed. Exact details of the deployment will be shared soon. I request everyone to be patient. I'll update you in a byte soon. Thanks"

District police and Station House Officers have been directed to raise police visibility and patrolling in communally sensitive areas. Delhi Police will also initiate strict legal action against mischief-mongers or those found indulging in any activity which may adversely affect the peace and tranquillity of the society. "Social media platforms will also be monitored. The platform shall be used with discretion, and users should restrain from spreading any unverified post," the Delhi Police advises.

In its series of dialogues with minority groups ahead of Ayodhya verdict, RSS interacted with Muslim professionals at the Nehru Memorial in the national capital. The senior Sangh functionary stressed that the world is watching us and anti-Indian forces are waiting to see the image of the country tarnished.

"Gopal Ji told those present in the meeting that the world is watching us. Anti-India people want the image of India should be tarnished. There should be no untoward incident post-Ayodhya verdict. We are appealing to both Hindus and Muslims with equal fervour," said Atif Rasheed, a member of the National Commission for Minorities, who also attended the event.

Bukhari added, "I hope that the constitutional superiority shall prevail and rule of law is not compromised. It is a testing time for the nation."

Dispute should be settled in favour of Lord Ram: Prince Yakub

Prince Yakub Habeebuddin Tucy, who claims to be a descendant of last Mughal emperor Bahadur Shah Zafar, on Friday said that the title should be settled in favour of Lord Ram temple in the Ayodhya land dispute case. "On November 17, the Supreme Court of India will pronounce its verdict on the Ayodhya title dispute. There are two descendants of the Mughal empire in India. First is the familial descendants which are my family. The second is political descendants which is the government of India. Since the title of disputed land in question is still held in the name of Emperor Babar. As such, the title should either come to me or go to the government of India. The title should not go to any third party," he told ANI in Hyderabad.

"As I have already made it clear in public that if the Supreme Court settles the title in my favour or the government of India then I would like to appeal to the government of India to settle the title in favour of Ram temple," he added.He further said that no mosque can be built or namaz can be offered on any disputed land."Lord Ram is known as Maryada Purushottam and is perceived as an ideal personality by several people. The whole world is watching us about how we are honouring Lord Ram," he said.

He added, "I would like to appeal to all the people that they should respect the verdict of the Supreme Court in this respect."

In view of the Ayodhya verdict expected before the retirement of Chief Justice of India Ranjan Gogoi on November 17,

The administration has prepared a foolproof security plan for the temple town to avoid any untoward situation. The holy town will have a total of 153 companies of security forces, comprising of central police forces, Provincial Armed Constabulary (PAC), Rapid Action Force (RAF) and Uttar Pradesh Police will be deployed in Ayodhya.

Among other key measures being taken include deployment of UP ATS commandos as well as sleuths of intelligence agencies in Ayodhya, besides monitoring through drones. People staying in Ayodhya's different dharamshalas and guest houses are also being scanned, and the police have appealed to people coming to the town to keep their identity cards with them at all times and cooperate during the security check.

Three-tier security arrangements have been made for the temple town in view of the Ayodhya verdict. The first phase was implemented from October 15, the second phase has been implemented from November 1, while the third phase will come into force a few days before the verdict.

The security of Ayodhya has been divided into 4 zones:

1. Red Zone: This will cover areas around Ram Janmabhoomi, where the security system will be the most vigilant, and no one will be allowed to visit the area without permission on the verdict day.

2. Yellow Zone: The entire Ayodhya town has been kept in this zone, and this includes all the temples, dharamshalas, hotels, ghats and houses. This zone will also have a multi-layer security arrangement.

3. Blue Zone: The outskirts of Ayodhya covering old Faizabad will come under this zone, which will also have a multi-layer security arrangement, which will have bar-coding along with various checkpoints.

4. Green Zone: All the districts adjoining the temple town, including Ambedkaranagar, Barabanki, Basti, Gonda, Sultanpur have been placed in this category. The police have been directed to remain alert. All vehicles passing through these districts will be thoroughly scanned and checked. If crowds from these districts begin to move towards Ayodhya, they will be stopped.

Notably, jawans of water police and fire brigade have also been deployed. The railway stations of Ayodhya and Faizabad will also be closely monitored.