The police, however, said that strict legal action will be taken against those who are involved in such activities. 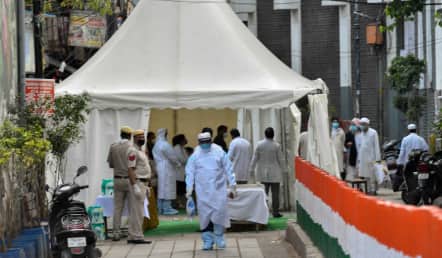 New Delhi: Chief Medical Officer (CMO) of MMG District Hospital in Ghaziabad on Thursday (April 2) night informed the local police that Tablighi Jamaat followers put under quarantine are making vulgar signs and roaming nude inside the hospital. An FIR has been registered against six people at Kotwali Ghantaghar police station.

The complaint stated that the attendees of Nizamuddin Markaz have been misbehaving with the hospital staff besides making lewd gestures towards the nurses. The CMO further said that the Jamaat members are also demanding cigarettes and bidi from doctors and staff nurses.

The police, however, said that strict legal action will be taken against those who are involved in such activities.

The SP City, Ghaziabad, said that a complaint was received from the CMO that the nurses of MMG hospital have alleged that six coronavirus patients admitted at the hospital's isolation ward are misbehaving with them. "We are at the spot for investigation of the matter," the SP told ANI.

Earlier in the day, Delhi Police Crime Branch sent notices to seven people including Tablighi Jamaat`s Maulana Muhammad Saad to give a written statement on why the lockdown rules were not followed by them. All these seven persons are named in the FIR and are now in quarantine.

Meanwhile, as many as 960 foreigners have been blacklisted and their tourist visas have been canceled in connection with the Tablighi Jamaat event.

"In the case of Tablighi Jamaat, Nizamuddin, MHA has directed Delhi Police and DGPs of other concerned states to take necessary legal action against 960 foreigners for violating the provisions of the Foreigners Act, 1946 and the Disaster Management Act, 2005," Office of the Home Minister stated.

It further said, "In the case of Tablighi Jamaat, Nizamuddin, 960 foreigners have been blacklisted and their tourist visas canceled after they were found involved in activities related to Tablighi Jamat."

Delhi's Tablighi Jamaat event has emerged as a hotspot for COVID-19 after several positive cases across India were linked to the gathering, including deaths in Maharashtra, Karnataka, and Telangana.