Son of former CM Lalu Yadav, Tej Pratap hit out at Bihar Chief Minister Nitish Kumar over his refusal to ferry back students and migrants of the state who are stuck in others states amid lockdown. 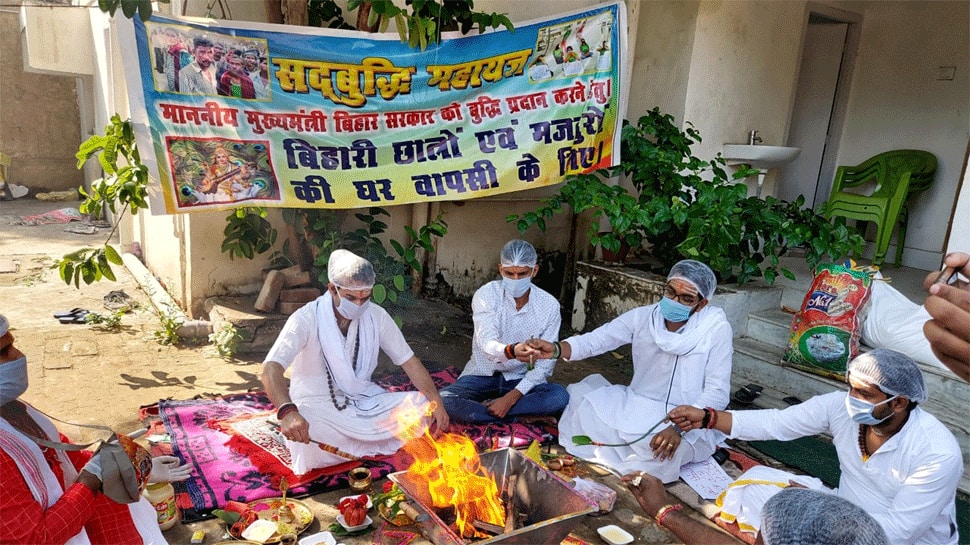 Patna: Former Bihar Health Minister Tej Pratap Yadav conducted a 'Sadbuddhi Mahayagna' at his official residence in Patna on Sunday (April 26). Visuals of the ritual showed that Tej Pratap, along with a few others, all donning face masks and hairnet, were sitting around a havan kund, in close proximity with each other.

Son of former CM Lalu Yadav, Tej Pratap hit out at Bihar Chief Minister Nitish Kumar over his refusal to ferry back students and migrants of the state who are stuck in others states amid lockdown. "The Chief Minister has lost his mind. His government does not look serious on the issue of bringing back migrants, who are trapped in other states."

He said that he is conducting a havan for the betterment of the Bihar CM, who has not been able to take wise decisions, and also for the safety of migrants and students, who are stuck in different parts of the country. He also sought permission from the state government to allow him to ferry migrants himself, saying, "I have a bus. If the Chief Minister allows me, I will bring back all the labourers and students of Bihar."

As many as 28 people tested positive for the novel coronavirus on April 25 raising the total number of cases so far in the state to 251. Out of these, 43 have recovered till date and two have died.